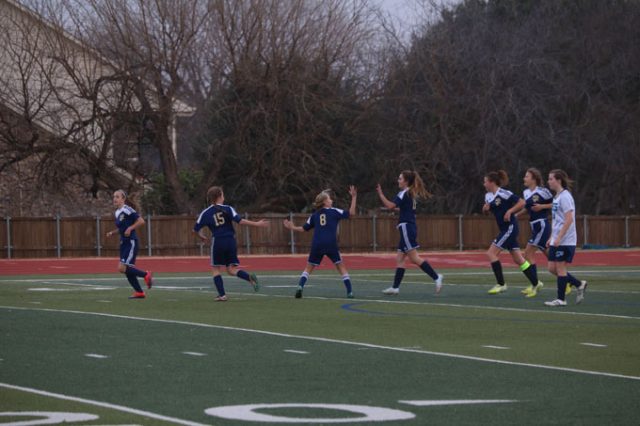 After a fabulous goal, the players, including 8th graders Alessia Catullo, Mary Ellis, Micah McDowell, and Truett Rothrock, congratulate each other for their amazing teamwork.

The Middle School girls soccer team is working through a season of rebuilding their young team. The girls have done well with new additions including incoming sixth graders, new students, and a new assistant coach. Coach Dierschke is working alongside Coach McDowell. Seventh grader Maddie Clark says, “It has been awesome having an assistant coach. It has helped us as a team improve with our game and gives us another person to help us out when Coach McDowell is busy helping someone else.” The Mustangs had a tough loss against Prince of Peace 1-2 on January 12th following a game against Providence on January 9th, ending with a 0-4 loss. “It would be easy for the players to get discouraged after a few losses, especially when the final score doesn’t reflect our dominance in possession during the game or how well we passed and moved around the field. But Coach McDowell and I have been so impressed by the girls’ continued intensity on the field and their development of skill and teamwork through the first half of the season.” says assistant coach Dierschke. Eighth grader Micah McDowell adds, “The whole team worked together and collaborated so well and I love how this team never quits no matter what the score may be. We have developed as a team on and off the field and when we play you can defiantly tell that we trust one another.” The girls have had a great season so far and have big hopes to win the district title soon.