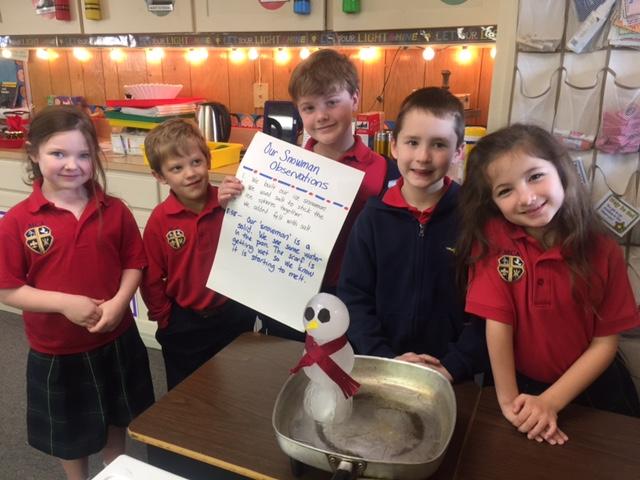 First grade students stand with their "iceman" after making observations of it.

The first grade students wrapped up their states of matter/snow and ice unit last week. The students predicted whether shape had an effect on the speed of ice melting. The first graders made an ice snowman and observed how it was solid. The students observed as it melted and became a liquid. Finally, they added heat to the water and evaporated the snowman turning it to gas. After the experiment, the first grade students wrote about what they would do if they woke up and saw snow. They continued doing experiments by making crystals in the shape of snowflakes using boiling water, pipe cleaners, and Borax. The first graders made a snowflake shape using white pipe cleaners. Using a solution made out of Borax powder and hot water that the students made, they hung their pipe cleaner snowflakes in a mason jar. After letting it sit overnight, the students found that crystals had formed on the snowflakes. Elise McKeller, first grade teacher, said, “The first graders loved seeing their sparkly snowflakes.” The students got to examine snow with magnifying glasses the day it snowed. Throughout this unit, students have studied the symmetry of snowflakes.  They did this experiment so that they could see all three states of matter: solid, liquid, and gas. First, the students filled three balloons with water and then froze them. After the water in the balloons was frozen, they removed the balloons to see three ice spheres. The first graders stuck them together using salt to make an ice man. They added felt eyes, a nose, and a scarf to their ice man. Throughout the day, they made observations of the ice man, and were able to watch it as it turned from a solid and then melted into a liquid. After it was completely a liquid, they added heat and observed as the water from the ice “snowman” began to boil and then evaporate. It then turned into a gas. At the end of the unit, the first graders grew snowballs with lower school principal, Chris Hydock, and McKeller. After growing them, they got to throw the snowballs at Hydock and McKeller. Using the different experiments, the first grade students were able to learn about states of matter and snow and ice in a hands on and exciting way.