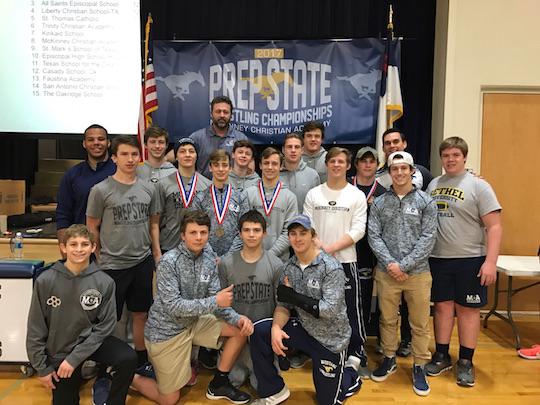 The McKinney Christian Wrestling Team gets together for a photo after a successful tournament.

For the past three years McKinney Christian Academy has hosted the annual Prep State Championships. Bringing in people from all over Texas, the Prep State Championships is always one of the hardest tournaments of the year. MCA came ready for the tournament and with a huge support from fans, all the wrestlers provided great matches for their opponents and battled until the end. Senior captain, Jackson Brock placed first in his weight class and will be wrestling in the National Prep Wrestling Championships. Will Harrell, a junior and a captain of the wrestling team, placed second in his weight class and will also be advancing to the National Prep Wrestling Championships. Although not qualifying for Prep Nationals, Caleb Doyle and Sam Harrell both placed fourth in the tournament. MCA completed the tournament with a lot of hard fought wins and a great spirit through the finish. Nearing the end of the season for most, MCA now looks forward to the TAPPS State Wrestling Championship which will be held on Feb. 18.