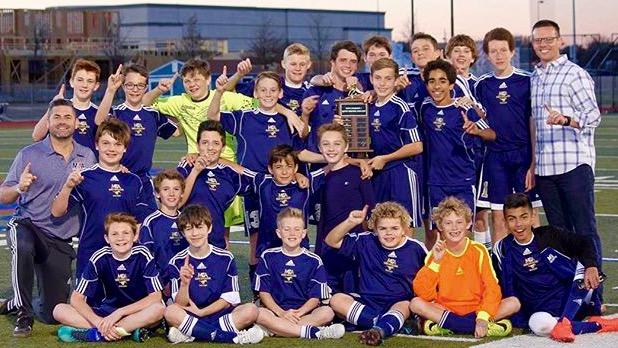 After a tough season of challenging competition and daily practices, the middle school boys took their record of 10-1-3 into the championship game against Good Shepherd on Thursday, February 16th, winning the 2017 TAPPS Championship.  The boys have worked extremely hard everyday and gave 100% to accomplish their season goal, to hoist the championship trophy.  For the eighth graders moving up to high school, this is a great memory of their final year of middle school and the best way to end their 2017 season.  Compared to their 2016 season, the boys had to really strive for the title without room for errors.

Eighth grader Jacob Finke says, “This year we had a good combination of new players and experienced players, we learned to communicate with each other, and work better as a team. Ultimately this year, we have learned to play as an actual team. We have improved in trust, communication with one another, and all around better to rely on one another.”

The boys faced several tough opponents this season with new teams in the district, but stayed strong and unified as a team, not individuals. They became very close on and off the field and built great friendships that will last for the future soccer seasons to come.

Seventh grader Elliott Mahadi adds, “It’s amazing that we were able to put in the work and get this result to show people that we don’t mess around with an awesome chance to have a championship title. I would say the key part is the bond we have as a team that was created by outside of school hangouts and team events. We stick up for each other and trust each other as a team and that shows by the result.”

The Mustangs are extremely honored to have such an amazing title, and hope to repeat history in their upcoming 2018 season.