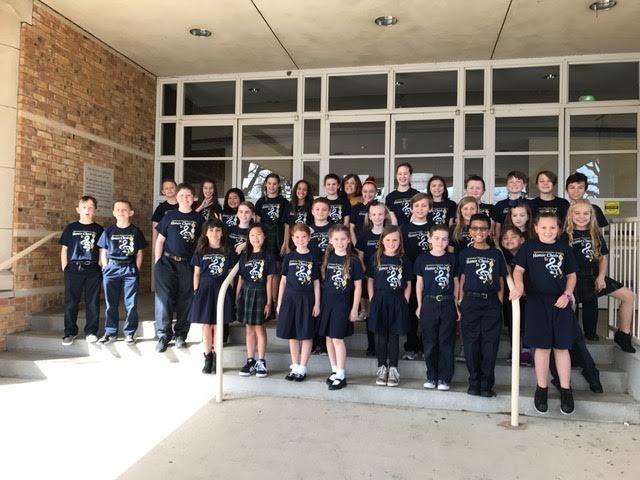 MCA Honor Choir stops and poses for a picture outside of Scofield School.

The MCA Honor Choir performed at the ACSI Music Festival at Scofield Christian School the morning of February 24, 2017.  Three memorized selections were performed before three judges who decide the rating and give the group critique sheets.  “We are so pleased to report that we earned a Superior Plus rating this year.  It is the highest rating on a scale that encompassed Good, Excellent and Superior, with plusses and minuses possible says Kathi Bass, Honor Choir director.

The Honor Choir is made up of 3rd, 4th and 5th graders selected through audition.  They meet all year two days a week after school.  This year they performed at a 9/11 Remembrance ceremony, the ground breaking ceremony kicking off the start of building a new Upper School building, at a football game, the National Anthem at an Allen Americans hockey game, Grandparents Day, Lower School Christmas Program, and will also perform the festival songs at our LS Spring Program in April.  “It has been a busy and awesome year and I am proud to be their director.  They have worked hard and now know the joy of a job well done” says Bass.