Serving Around the World 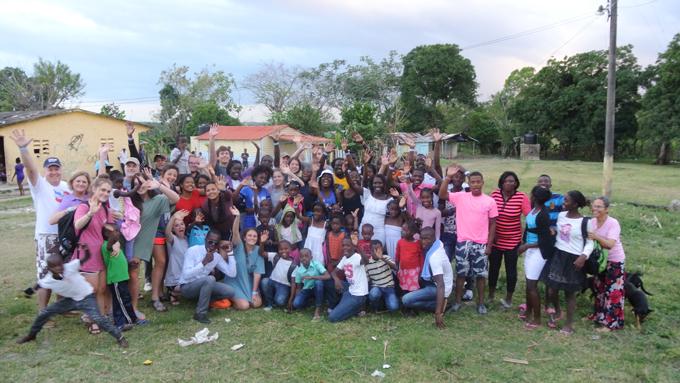 The plane left early on a cool Saturday morning, March 11th, bound for the Dominican Republic. The students on the trip were the following: Kjerstyn Franzmeier, Mary Hana Spencer, Abigail Gordon, Avery Philips, Ali Johnson, Katie Jones, Sophie Temple, Mac Grimes, Jud Williams, Griffin Lee, and Christopher Thomas. As well, the mission team leaders were Rob Temple, Lisa Temple, Dr. John McGinn, and Laura Smith. The team has been preparing for this trip for a long time with mission meetings every Wednesday leading up to the trip.

Upon arrival to the Dominican Republic, the team settled in at a large estate, Casa de Abraham, that was positioned about an hours drive away from the village, Batey, that the team would travel to daily. After attending the local church their first morning, the team established their presence with the village and the kids. This day was also the first day that the ESL, English Second Language, class was introduced and they overall had fun day working together. The second day, the team went to the village and continued their devotions, church sermons, and worship songs with the kids from the Batey. The skit that was performed the second day the skit of the Good Samaritan while they also did crafts, such as: salvation bracelets and a multitude of games. Every night the MCA missions team would lead their own devotion for the whole group.

The third day was the culture day for the team to go explore the immediate area, but, before this happened, the team went to the Batey. There they showed a skit of Balaam and the Talking Donkey, sang songs, and had tons of fun loving and playing with the children. After a couple hours at the Batey, they proceeded with their culture day by going to 3 Eyes National Park which are three underground caves located in the center of Santo Domingo. They went and toured a fort established by Christopher Columbus in 1512 and then ate a nice dinner by the seaside. Junior, Mac Grimes, commented about the culture day saying, “The culture day was very interesting as we toured the city and fort. I thought it was awesome to look at the history of the Dominican Republic and to have a great time with friends.” Following the long third day, day four came with mixed emotions as it was their last day at the Batey, with this last day they sang songs, did a skit of Jesus feeding the 5,000, as well as many crafts and games. Following this sad last day at the Batey, they went to a beach for the following afternoon to have fun in the sun. Day four flew by and the team was upon day five in which they went to a large pool/resort with the kids from the village. There they had fun and established the final day as a success though tears were shed as goodbyes were said at the end of the day.

One of the leaders for the trip, Lisa Temple, commented about the overall trip saying, “This was my eighth trip to the Dominican Republic to serve in Santa Alicia. Each trip has been different with a different group and different vibe. This one with the MCA kids will always be remembered in a very special way. Being able to take these kids that I have known for so long and watch them play, teach, and worship with our Santa Alicia family was so special. I so enjoyed our Wednesday lunches together prior to the trip too. This mission trip was very much steeped in prayer and preparation. I am blessed!” Not only did the team preach and show the love of Jesus Christ through our actions and deeds but the kids of the Batey showed us the true love and joy that can be found even in the worst conditions. They will always be implanted into our mind and we really had a great and influential time that helped us grow as Christians as we helped them.

To view more pictures of the mission trip to Dominican Republic click on the link https://mcaupperschool20162017.shutterfly.com/pictures/1174