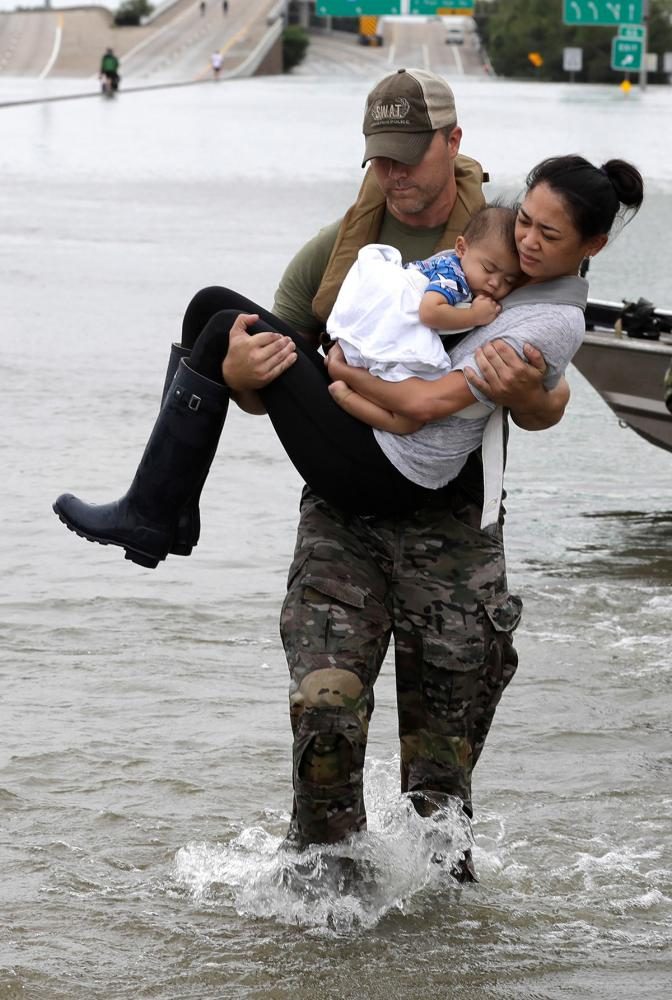 A Texan carries a woman and her child who had been stranded with the rising flood waters trapping them in their house.

Texas has been struck with tragedy as Hurricane Harvey slammed into the coast near Houston and travelled northward. Hundreds to thousands of people were stuck in their houses as the flood waters rose to a record height. Rescue teams had their work cut out for them as hundreds of SOS signals were sent to local Coast Guard stations and police departments. As well, many volunteered with their personal boats to help any and all in need. Thousands of Texans and Cajuns joined forces to aid, support, and rescue those who were trapped by the flood waters. So far the death toll has risen to 63 as rescue efforts are still underway and the estimated amount of money to repair and rebuild all areas, thus far, effected by the hurricane is travelling well above $30 billion. Some speculate that the amount of total money needed to be invested into it will be around $160 billion.

But, I think that this Hurricane, despite how horrible it is, has done good for our Country in a weird way. As a Nation, we have banded together, unified for once in what seems like a long while, supporting our fellow Americans. Americans all around the country are starting donation drives in order to support Texas and all affected by the hurricane. Though not all are participating, Texans have shown to this country just how we should act. We should be selfless, supporting our neighbors, not worrying about race, religion, or anything else. To all the other news sources that have made this into a racial topic, religious topic, or debating the First Ladies’ shoe choice, learn the truth behind this tragedy. It is Texans who have no obligation to help but feel the greatest one to do so. Aiding all when in need. This is what I remember of how we acted as a country and hopefully this country can learn something from this tragedy.