Retreat is a Treat

Featuring a Few Obstacles and a Lil Crafters Performance. 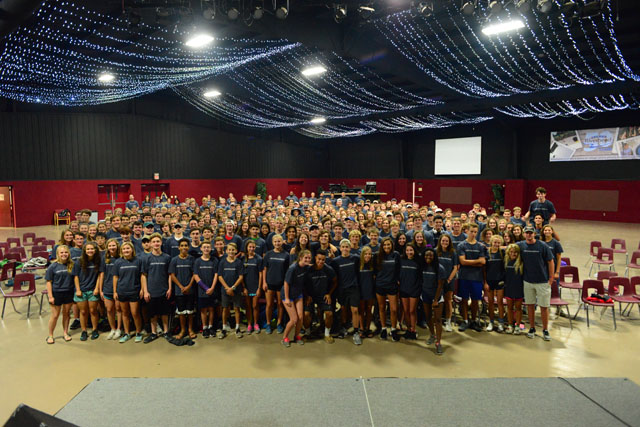 The entire upper school stands together for a group picture after retreat.

From the storm that kept everyone under cover to the rained out games, students still managed to have an enjoyable retreat. Many students say that this has been their favorite retreat that the MCA Upper School has ever had. The location was the same, but the experiences were unlike ever before. Despite the lake, river, and pool being closed, everyone was able to find activities around the camp to enjoy.

As the freshman, sophomore, and junior buses pulled up to Riverbend Retreat center, the seniors were quick to greet everyone and hand out devotions. Sophomore, Seth Pugh, said, “I believe that the new seniors will make fine leaders that will encourage us lower class men to do right.”

During free time, students hung out with friends, new and old, at the turf field, on the cement court, playing sand volleyball, ping pong, gaga ball, or literally “hanging” out in their classmates. The blazing heat nor the thunderstorm stopped anyone from having a good time.

After dinner, the praise band led the school in worship and Pastor Trey gave a message about the theme this year: being a Romans 12 Christian. Junior, Elyse Mead, commented, “I really enjoyed the songs the praise band chose. They performed well and I thought Mr. Key did an excellent job singing and playing guitar.” Since it had started raining while we were worshipping, it was too wet for the games that were planned to be outside. Instead, everyone went back to the cabins early. This was a chance for individual grade bonding, and many grasped this opportunity.

The morning before boarding the buses to head back to McKinney, it was time for the annual skit competition. Teachers Shera O’Neal and Coach Jerrod Butler’s small group took the win with a dance off and a special performance by Lil Crafters. The “TNT” rappers commented, “Retreat was explosive and a turning point for our success. Our audience was incredible, the performance was raw and we are thankful to our fans for letting us share our music with them.”

After skits, the floor was open for any student to give a testimony or just ask or give advice. This year was different though; there was never an awkward space where no one would talk. One right after another, people would stand up and give testimonies. It was an opportunity for the upperclassmen to give advice to the lower class men, but the upperclassmen were able to learn a thing or two from the younger students.

Junior, Trey Faulkner, stated, “Even though everything was closed, this was still my favorite retreat by far out of the three I have been on. I had a blast bonding with not only my grade, but also as a high school.”