Lower school students Kadence Ackmann and Tatum Barnard play on a soccer team that is one of the top in the state. 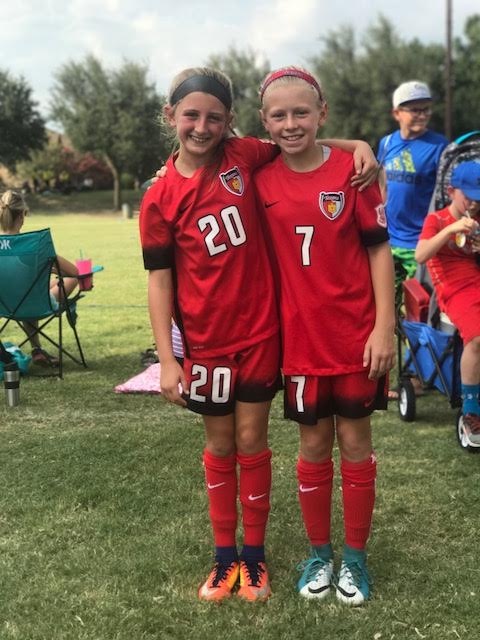 Kadence Ackmann and Tatum Barnard take a picture after their soccer game over the Labor Day weekend.

This past summer, 5th grade, Kadence Ackmann and 4th grade, Tatum Barnard trained for a soccer competition that would take them to the next level. Both student athletes play on the Dallas Texans Soccer Club. Ackmann is a defender and an outside midfielder while Barnard is a defender. Competing in the two week national qualifier at the end of July, meant that they had to take training very seriously. “The hardest part was training for the heat. It gets over 100 degrees in July.” Coach Casey Mays said. Through June and July they strenuously prepared and conditioned with only one day off in the month of July. “Training is four hours a week minimum in June, and eight hours a week maximum during two-a-day practices in July. We spend one hour week training with a speed/agility/quickness coach and the rest of the time is with the head coach and the soccer ball.” Mays said.

The tournament took place at the University of Texas at Dallas, where teams from all over the North Texas region would come and play. The tournament lasted two weekends with six games total. Qualifying for Lake Highlands Division One would mean that they would become one of the top 20 teams in the state of Texas. “I was happiest for all of our players and their families to see the satisfaction, happiness and relief once we had qualified for Division 1. It is a good feeling of accomplishment. It is also a feeling of motivation to set the next goal for our team and begin working to achieve that goal.” Mays said.  Now they will train for other events and tournaments throughout the year. “Now our team will train for a top tier finish in the Lake Highlands Classic League standings for the select soccer year which ends in May 2018.” The Lake Highlands Classic League is one of the top youth girls leagues in the nation, and it has been around for over 20 years.