NFL Players have begun to take a knee during the Star-Spangled Banner- and America noticed. 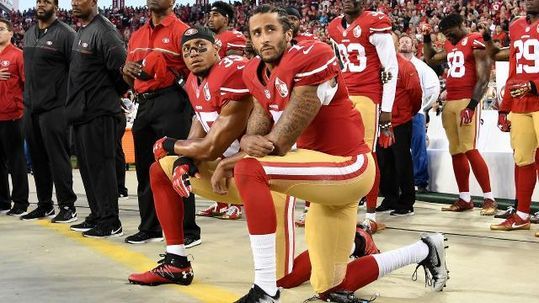 In recent sporting events, something has been different. It’s not the game, the venues, or the stadium food. It’s a change unforeseen by many, frowned upon by many, and praised by many: players are taking a knee during the singing or playing of the Star-Spangled Banner. While ours is the generation of assuming without sufficient evidence, one must be diligent in learning all of the background information surrounding this controversy before making up their mind about it. Many remember the first time an American football player took a knee before a game. It was a preseason football game in 2016, and he was alone. His name is Colin Kaepernick, and he was a quarterback for the San Francisco 49ers at the time. His motive was to get attention, which he doubtlessly accomplished, but it actually had a purpose. Kaepernick took a knee so that Americans would notice and ask the question, “Why?” The knee is a demonstration to America that the flag that waves above us does not represent America’s values, according to him.

A year later, President Donald Trump asserted that players should be fired for demonstrating in such ways. Needless to say, people were frustrated. Every team in the NFL demonstrated in some ways- whether taking a knee or linking arms- but it calls the motivation into question. Are players kneeling in order to call to attention very real racial issues, or are they doing it to spite a President they believe is an insensitive, biased man? When the initial issue is examined, the facts speak for themselves. Kaepernick took a knee during Barack Obama’s presidency- a very well liked President. In the beginning, it was never an issue of who sat in the desk at the Oval Office- it’s always been an attempt to grab people’s attention and turn it toward reforming law enforcement.

Apart from the original purpose of the demonstration, as a proud American citizen, I am frustrated. Millionaire athletes feel like they are being courageous for taking a knee during the anthem while a flag flies over their heads. They feel like they are taking a knee while servicemen and women across the planet are taking a stand against real, violent injustice. Soldiers risk their lives to do so. America’s flag is no regular flag. Countless men and women have died so that flag can wave. Thousands of families have been torn apart, tears have been cried, blood has been spilled so that America can exist. To kneel before the flag in protest of American values is absurd- the flag isn’t a picture of what America stands for, it’s a symbol of America as a whole. The Anthem itself is a song about the flag remaining intact above a battle. It is nothing about what values are represented, it’s the logo of our country. It’s a symbol held up by the sacrifice of many.

Players need to realize the influence they have on students. Athletes are role models for football players everywhere- at all levels. Due to these recent demonstrations, high school students have decided that it is okay to follow in their footsteps. This past Friday, two students were kicked off their high school team in Texas. Some peewee teams are taking a knee because of their parent’s feelings. Athletes need to know the fine line between disrespect and activism. They have so much influence, and are abusing it so badly.

Apart from the true meaning of the flag and the misplaced form of demonstration, one thing remains- Americans have to be unified. An alternative to the disrespect of kneeling before the flag has been noticed among football teams. They have linked arms and stood during the Anthem. This is a perfect image of America- many have different purposes and races, but one thing remains the same: the common bond of citizenship. America will never be exactly what it wants to be- no nation on the face of the planet has been without fault, but that should never stop anyone from being proud of where they came from and who they are.