In an unforgettable match against the Lubbock Titans, the Lady Mustangs finish their season 23-10. The girls will always cherish their last game together and will remember this season for years to come. 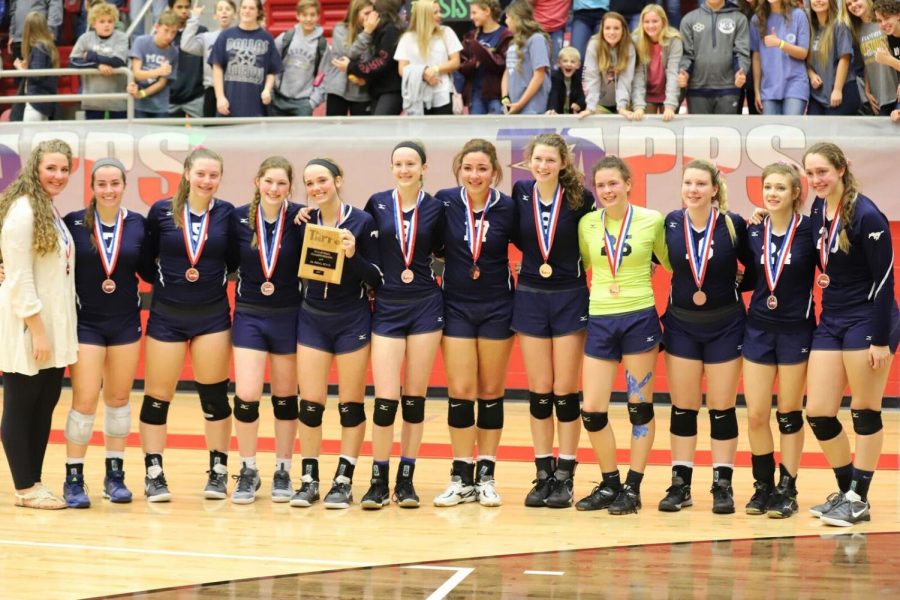 The girls keep their heads high and smile with their medals before heading into the locker room.

Packed up and prepared to play a great game, the Varsity Lady Mustangs headed to West, Texas to play their Semi-Final game against the Lubbock Trinity Lions. The girls left Thursday afternoon with a fun send off from their classmates, teachers, and parents lining the roads of MCA. Arriving to practice in Alvarado Thursday night, the team had an intense last practice as a team before the big game. Soon after, the girls headed to West High School to see what the gym was like and get an idea for how the next day would be.

After a fun and long night, the girls were ready to play Lubbock with hopes of becoming State Champions. They arrived at 8:15 to get ready for a team picture and pre-game interviews at 9:00. Soon after, the Lady Mustangs took the court for warm ups with the game beginning at 10:00. Fans travelled hours to support the team and filled the arena with cheers and positivity.

Starting off the game with the first serve, the Lady Mustangs went into the first set with confidence and high energy. The score went back and forth continuously, ending at 22-25 with the Lady Mustangs barely trailing behind. Into the second set, the girls continued to play hard, until the unexpected occurred. The score was 13-12 and starting outside hitter Mikayla Dahl went up for a hit and came down wrong, resulting in a torn ACL, slightly torn MCL, and her knee cap out of place. This was an extreme loss for the Mustangs, and challenging for the girls to continue on without their starting outside hitter. It was extremely difficult for the Mustangs to refocus, and they ended the second set at 16-25.

With broken hearts for their teammate, the girls continued to push and finish in the third set strong. Dozens of emotions from cheers to tears filled the arena, as the girls knew this would most likely be their last game together. The third set ended 17-25 without one dry eye on the court. However, the Lady Lions team unexpectedly surrounded MiKayla Dahl on the sideline after the final point, and laid hands on her in prayer with unexpectedly kind hearts and outstanding sportsmanship.

The girls shared a moment together full of hugs and unforgettable words spoken, that the girls will never forget. Soon after, the Mustangs all received TAPPS metals with tears rolling down their cheeks, and sang the fight song with the crowd and each other one last time.

Nothing but silence filled the air as the girls headed into the locker room. No words could describe the emotion in the room after this game, as the coaches gave their final words and captains shared their hearts with the team. The girls will never forget this team, nor the love and emotion shared on this day. And although the Mustangs didn’t have the results they expected, the girls broke MCA history and this season will be remembered in MCA volleyball for years to come.