The Mustangs won in an exciting comeback matchup against First Baptist on November 10. 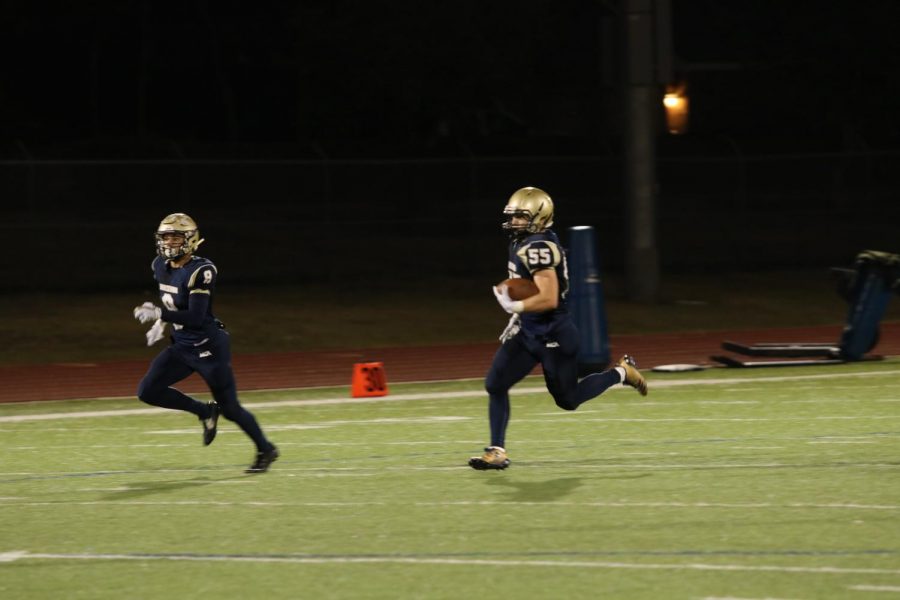 Senior Will Harrell returns a punt for a touchdown.

On November third, the Mustangs faced off against the Chargers of Shelton at John Paul II’s field in Dallas. Both teams knew what was at stake going into the game: a District Championship. The fourth quarter came after a back-and forth race. The score was 19-22, with the Mustangs on top. They scored with three minutes to go in the fourth, and the Chargers had the ball.

They drove down the field and scored.

MCA had one more chance at the win. An offensive drive with minutes left in the game was the Mustang’s final effort. They got a first down, then went three-and-out. The Chargers got the ball and took a knee.

The game was over.

If MCA had won the Shelton game, they would’ve been on their way to being district champions. Unfortunately, the Mustangs lost that night by three. On the ride home and at practice the morning after, the team knew they had to beat First Baptist in order to have a chance at winning district and a higher playoff seed. If they were to beat First Baptist by eight points, the Mustangs would be the standalone district champs.

After a week of preparation, the day arrived.

Friday, November 10 was the day. The team came out flat and allowed 20 points in the first half. “I was about to leave. I wanted to go to IHOP and we were getting whupped,” says one spectator.

After the half, there was a different energy on the field. The Mustangs scored twice early in the third, then a spectacular 70 yard punt return by senior captain Will Harrell put the Mustangs ahead. Harrell says,”I play O-Line so I never really get my hands on the ball. I took my opportunity to run with the ball and help my team win.” In the fourth, the Mustangs outscored the Saints by three. The nail in the coffin was a last-second interception by Ford Dossey. Dossey says, “I was full of adrenaline. I knew that if I caught the ball, we’d be district champs. When I caught it, I went down on a knee, so there wouldn’t be a fumble or anything.” The football team stormed the field to celebrate while First Baptist went to their sidelines. “It felt great to win,” Dossey says.

The Mustangs will face Lubbock Trinity at 1:00 p.m. on Saturday November 18 at Melissa High School.