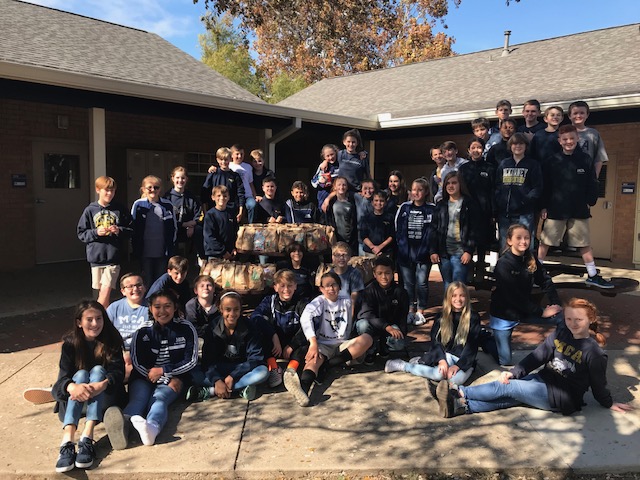 Over the past few weeks the Middle School students donated items to help with the care packages for VFW soldiers. Many 6th graders got together for community service day and prepared goodie bags filled with the donated items such as deodorant, tooth brushes, non-perishable foods and handmade cards that were to later be sent off to soldiers that were stationed in foreign countries.  The same week the sixth and seventh grade students prepared their annual Patriot’s Pen essays that they would send off to judges and receive a 1st, 2nd, and 3rd place for each school. This years topic was “America’s Gift to My Generation”. Mrs. Clark, who officiates the contest, said:
“the contest itself promotes patriotism which is the love one has for his country.  Students had to step back and really think about the gifts they receive from living in a free country.  It is easy to take this for granted on a daily basis. Many children all over the world do not have the same gifts and privileges as our students do. Lastly, students very often look at the topic through the lens of a Christian worldview and their writing reflects this.They are witnessing to the judges and anyone who will read their essays.  God uses us in ways we often don’t even recognize to draw others to Him…and sometimes this can even be through a writing contest.”
The winners of this annual competition have not been announced yet, every year the VFW sends representatives to present the winners with their awards at a special chapel. This is expected to occur early on in the new year.