What happens when Gru meets his long-lost twin brother. 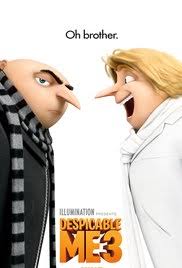 Despicable Me 3, shows the journey Gru has to go through to meet his twin brother, Dru. Gru is ecstatic to learn that he has a twin brother, who was seperated at birth. However, when he finally does arrive to meet his brother he learns it’s not all he was expecting. As we have learned from past movies, Gru gave up being a villian for his three new daughters. His brother Dru on the other hand, aspires to be like his brother. He wants the life of evil that Gru once had. Dru is set on convincing Gru to teach him how to be the best villian. The question is though, will Gru be willing to go back to his old ways?