The One and Only Ivan

Ivan has had a dark past but, new hope arrive when a baby elephant (Stella) is brought to the mall. 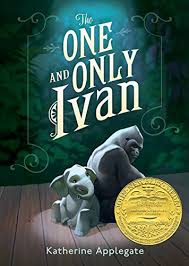 Ivan is a warm-hearted, loving gorilla. He is stuck living in a small cage and all he has is a small television and tiny window. He has a few friends around him including Stella, an injured circus elephant, and Bob the dog. While, he has been living in confinement, he learned to understand humans. Most humans in Ivan’s life are ruthless and mean. However, a janitor named George, who works at the mall shows kindness. George’s daughter Julia, is an artistic young girl, who loves to sit with Ivan and his friends and draw. A new baby elephant, Ruby is brought in to bring some extra money. Stella is a mother to Ruby who was torn away from her mom. Although, Stella’s injury has been worsening. Mack, is the ruthless owner, thinks he’ll save more money by postponing the vet visit but, she doesn’t make it till then. Her last wish was to have Ivan watch over Ruby and keep her safe. One day Julia brings Ivan some crayons and a sketchpad. Mack sees this and Ivan’s drawings and decides to sell them for some extra money since, business has been slow. Ivan decides to use this to his advantage and draw a picture of him in a zoo. Trying to portray that he and his friends want to be moved to a better home, where “humans make amends”. He hopes that Julia will be able to communicate the message to anyone who can help. The drawing attracts loads of visitors, and to Ivans luck some protesters. They are able to move Ivan and Ruby and everyone else safely to the zoo, where they can live happily.