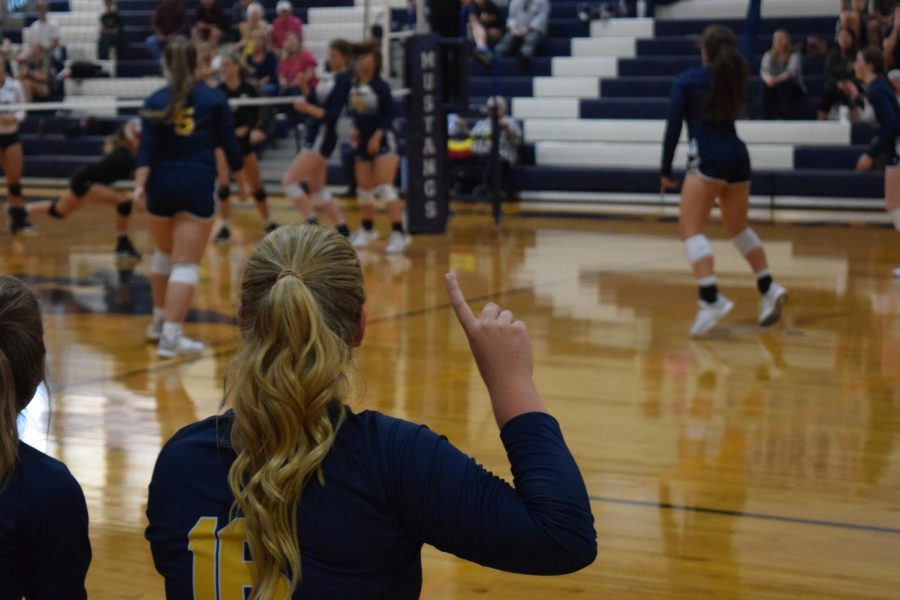 Junior Morgan Oden cheers on her team as they score the final point.

On Thursday August 30 the MCA Volleyball Team played defending state champion Waco Live Oak.  The first set started off close but the Mustangs quickly pulled ahead as it progressed. Mustangs finished the first set with a kill from junior Aby Beck, winning 25-13. In the second set MCA pulled ahead immediately with serving runs from senior captain Emma Lowes, and sophomore Truett Rothrock, leading 15-1. As the set progressed Live Oak scored a total of five points and with a tip from Courtney Martin on the right side, the second set finished with a score of 25-5. The third set started off strong with two aces from Lowes and a kill from junior Allie Smith. The match ended 25-12, beating the state champions in three sets.

The Mustangs swept Live Oak in three sets ending the game in under an hour. When asked how the team played compared to the game they had lost on Tuesday August 28 Smith said, “I think that we came together as a team more and kept our energy up and encouraged each other throughout the whole game. I think we needed the game on Tuesday to push us and give us the drive to redeem ourselves on Thursday.” When asked the same question Head coach Tara Ackmann commented that the team “bounced back after our loss from Tuesday night and dominated the defending state champions.” On Thursday our Lady Mustangs beat the defending state champions in a match redeeming themselves from their previous loss on Tuesday.