Honor's Choir went to Collin College for the 9/11 Remembrance Ceremony. 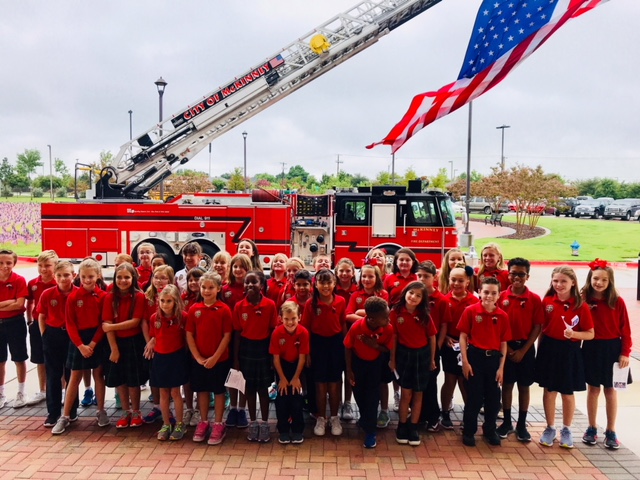 The Lower School Honor Choir groups together to take a picture in front of the fire truck.

On September 11 of every year, the United States observes a day of remembrance for the people who died at the tragic event that happened 17 years ago. It is a day of honoring the first responders and victims of the terrorist attack that lost their lives. The 9/11 attacks on the Twin Towers, Pentagon, and US Capital are important to U.S. history and the effects are still felt today. The Lower School Honor Choir went to the Collin College 9/11 Remembrance Ceremony. The group sang songs “America the Beautiful,” “God Bless America,” “America (My Country ‘Tis of Thee),” and “Let There Be Peace On Earth.”

There were many important figures at the ceremony, including Color Guards, retired NYPD officers, Captain Irick of McKinney Fire Department, Fire Chief Danny Kistner, Senator Van Taylor, Mayor Fuller, and McKinney Police Chief Greg Conley. There was also a large public audience and first responders present. The Honor Choir was very respectful and took it very seriously. After the ceremony, the kids enjoyed taking pictures with the first responders and received many compliments.

Lower School Choir teacher Kathi Bass said, “It was important to me that the choir sang at this event because I wanted them to see what it means to support and help your fellow countrymen.  To many it is not just “lip service”, and to some it was there very lives.  I want them to learn and feel patriotism for their country and appreciation for what they have as Americans.” Students learn about the 9/11 attacks from school and their parents, but nothing compares to experiencing the effects and the way it brings a nation together. The ceremony helped the students to understand the meaning and importance of the tragic day in America’s history.