Mustang volleyball ranks third in 5A thanks to the dedicated fans of the late night spirit squad. 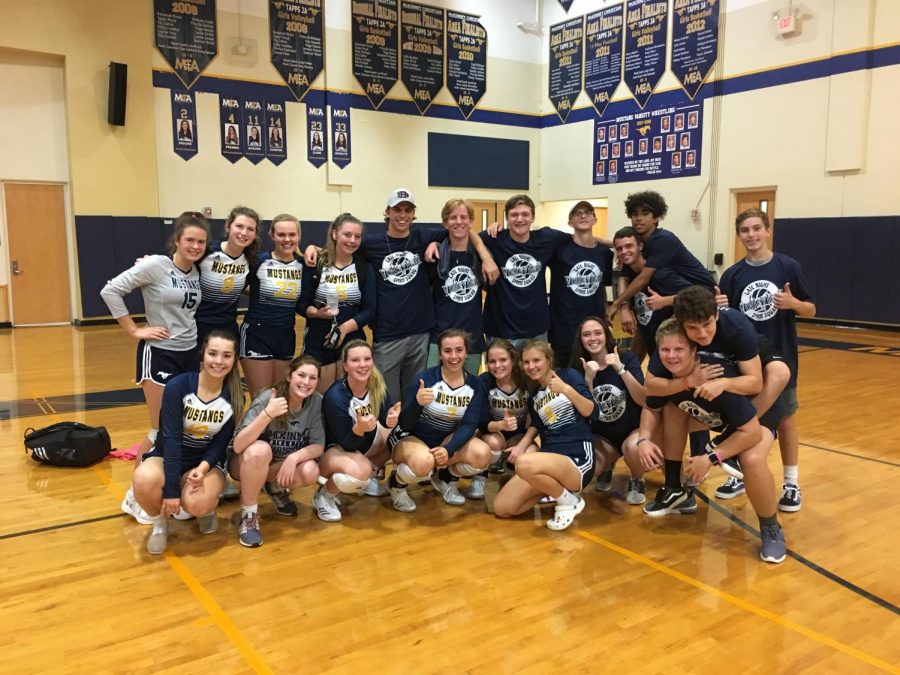 Varsity volleyball celebrates a big win with the Late Night Spirit Squad in their new t-shirts.

This year Mustang Volleyball has developed a fan section that has changed the course of their season. This group of dedicated volleyball fans is referred to as the “Late Night Volleyball Spirit Squad” and are responsible for the teams biggest wins this season. The first of these wins was the big district game against the team’s biggest competition Prince of Peace. The fan section came out with an energy so inspiring it spread to the team and the whole gym, and though the Mustangs were predicted to lose the match, they ended up beating Prince of Peace in four sets. In the same week, our Mustangs played another big rival, Frisco Legacy, for MCA’s homecoming game. This homecoming game was a redemption match for them after playing Legacy in their home gym and losing in three sets (Click here for details about the game at Legacy). Once again the energy of the Late Night Spirit Squad was so inspiring the Mustangs won the game after four intense sets.

The Squad has attended most of home volleyball games so far this season as well as some away games. Parts of the Squad came to the game at Frisco Legacy, and many traveled all the way to Fort Worth for a game against top-ranked team Fort Worth Christian. One dedicated fan, Junior Lee Leps, even came to a game after having his wisdom teeth taken out just a few hours prior to the match. When asked about his decision Leps said, “I just love my Lady Mustangs and needed to come support.” The volleyball teams success this season has not been achieved solely by the six players on the court, but they have accomplished such great things thanks to the seventh player cheering them on from the sidelines.