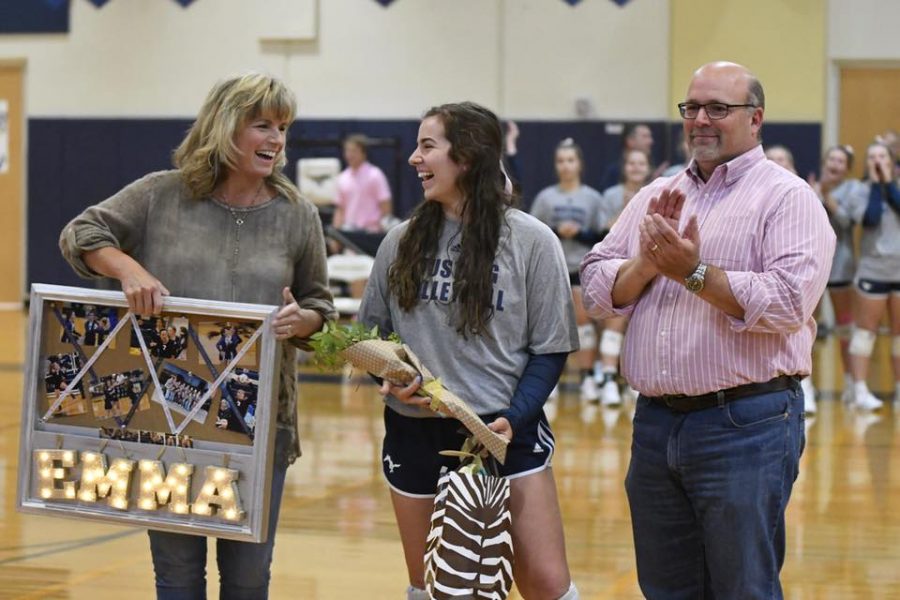 Senior Emma Lowes laughs with her family as she is recognized at senior night.

On Tuesday, October 8 the Lady Mustangs played in an intense match against district rival Prince of Peace on their home court. The Mustangs were fighting for district champs, for Prince of Peace they were fighting for co-district champs. The Spirit Squad had followed the team to Carrollton and were ready to cheer on their Lady Mustangs. The game lasted five intense sets. The first set was a Mustang victory ending with a score of 25-15. At the end of the first set, it appeared that the Mustangs would finish the game quickly, but Prince of Peace started fighting back in the second and third sets, winning with scores of 25-20 and 25-12. By the fourth set, the Mustangs brought back the fight, pushing back against Prince of Peace and winning the fourth set 25-17. The teams went into the fifth set. The fifth set went back and forth and was tied 16-16 when Prince of  Peace pulled ahead and won 18-16.

The following Thursday was senior night and volleyball’s only senior, Emma Lowes was recognized. Emma has been playing varsity for four years and will be going to play volleyball for the Iowa Hawkeyes, and has been nominated for Under Armor All-American. On this night the girls were playing Grapevine Faith. The game was believed to be close but when the Mustangs came out swinging, they finished the game in three quick sets. The first set ended with a score of 25-10. In the second set, Grapevine fought a bit harder and the set ended 25-18. In the third and final set, the Mustangs ended it 25-13.