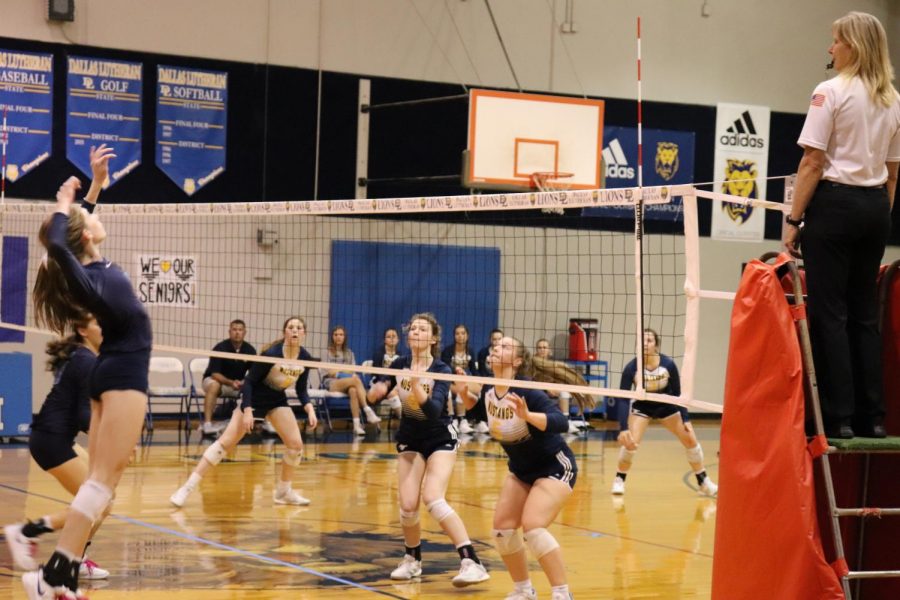 Sophomore AvaGrace Haggard and junior Allie Smith get ready to block Prince of Peace hitter in the fourth set.

On Tuesday October 23 the McKinney Christian volleyball team played Prince of Peace, their district rival, in a tie-breaking match at Dallas Lutheran. The game lasted four sets. In the first set, Mustangs were down 13-18 before they came back fighting and ended the game with a win of 26-28. In the second set, the Mustangs were however they failed to finish the game and Prince of Peace came back, winning the set 25-23. The third set ended the same, in a Prince of Peace victory and the Mustang’s failure to finish. The ending score was 29-27. The fourth and final set was heartbreaking for many Mustang players and fans. The set ended in a mustang loss of 26-24 after giving up the lead. Although the Mustangs had lost, Spirit Squad member Jacob Finke said “It was one of the best games I’ve seen the team play this year. There was a lot of devotion and hustle and I could really see the team working together as a family.” Though the team lost, they played a good game and ended districts with a bang. The game resulted in the Mustangs having to travel to Austin and play Austin St. Michael’s Catholic School in the first round of playoffs Saturday October 27.