Lady Mustangs face off against the homeschool team Dallas Thunder. 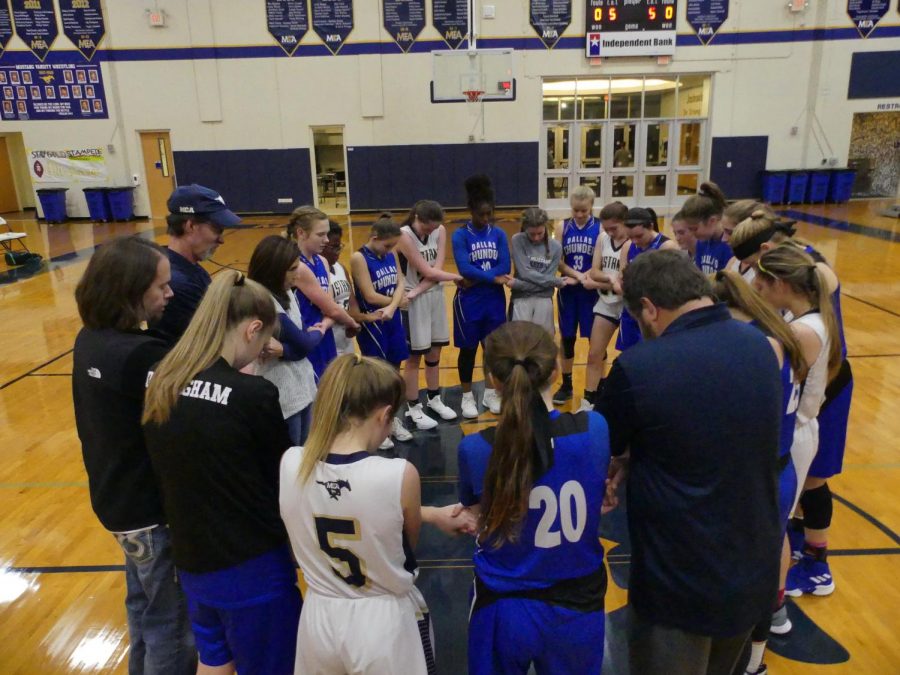 After a tough match against Dallas Thunder, the teams come together to pray.

Tuesday, November 28 the varsity girls basketball team played the homeschool team Dallas Thunder in their home gym. The Mustangs put up a good fight but were outnumbered by the homeschool team. In the first quarter, the Mustangs played great defense but struggled to get the ball to the basket. The first quarter ended with a score of 20-2. Dallas Thunder almost always had two 6’0 plus players on the ball handler making any attempt to score extremely difficult. In the second quarter, Thunder scored 12 more points while the Mustangs scored three, making the halftime score 32-5. After halftime, junior captain Waverly Frisbie took charge making the game seem to move at a little faster pace. In a few different instances, the Mustangs worked together to get the ball to Frisbie in a position for her to drive straight to the basket. Unfortunately, the difference made was not quite enough and the end score for the third quarter was 45-11. The fourth quarter went by fast as the Mustangs played their hearts out against the bigger homeschool team. They greatly improved their defense and reduced Thunder’s scoring. The final score was 54-16, Thunder scoring nine points in the last quarter and the Mustangs scoring five.