Kicking off the Track Season 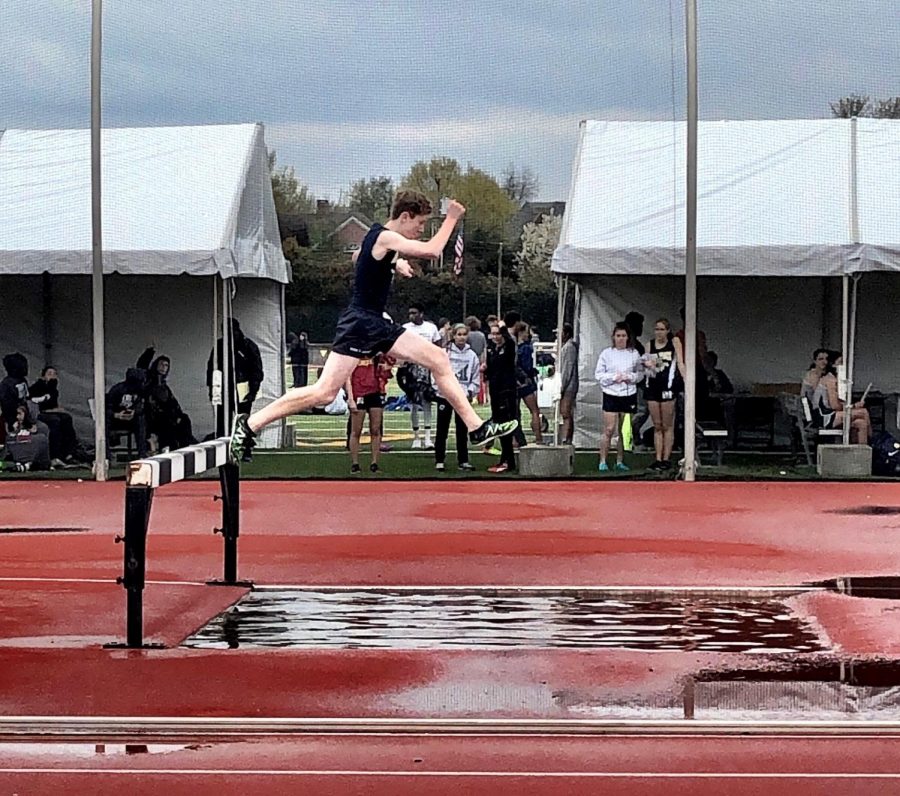 Leaping over the hurdle during the 2000m steeplechase, sophomore Aiden McKeller beat his older brother, senior Everett McKeller's, previous time for this event.

When spring break ends, that means the start of the track and field season for all Middle and Upper School runners and throwers. The Middle School team competed in a meet at St. Mark’s School of Dallas on Friday, March 22, and the Upper School Varsity team ran the next day. Contrasting with the sunny, clear skies on Friday, the track was covered in puddles by the time the Varsity runners competed Saturday morning.

As this was the first meet of the season, the coaches wanted the kids to do their best and get a time to go off of for the rest of the season. Head track coach Jerrod Butler said, “The goal of competing in this meet was to get exposure to a lot of the big schools around us and give our athletes an idea of what it takes to compete at a high level. We also wanted to be able to get some times on our runners so that they can see where they are versus where they want to be. If they were not pleased with their times, they have an idea of what kind of work in practice it’s going to take to get to their end goal by the end of the season. I think this meet validated some of our runners and showed them that their work has paid off, and I think it exposed some others that know they have more to give in order to be successful.”

The Middle School girls placed fifth as a team out of 23 different schools, trailing the fourth place team by only two points. Eighth-grader Alexis Pogue placed top 10 in the 100m and 200m dash, each race having over 50 girls competing. Kadence Ackmann, who placed seventh, was the only sixth-grader in the 800m race to place in the top 10. For the 1600m, MCA’s own Belle Kanz, eighth grade, placed fifth, and Leigh Evan Kitsmiller, eighth grade, placed third in the 300m hurdles.

For the Varsity runners in the 3200m, senior Riley Pyle placed fifth, senior Juliana Roller placed sixth, and junior Taylor Robinson placed eleventh, only missing the top ten by 0.04 seconds.  The competition was fast at this first meet, and placing top ten was a difficult feat to achieve. The only MCA athlete who managed to place top three was senior Josh Pawlish, placing second in shot put and first in discus. Senior Elyse Mead commented, “Although my races weren’t spectacular, the rain and cooler weather helped, and it felt good to get back on the track again.”

After running in this competitive meet, the MCA runners understand that they need to continue to show up to practice and work hard daily in order to keep improving.