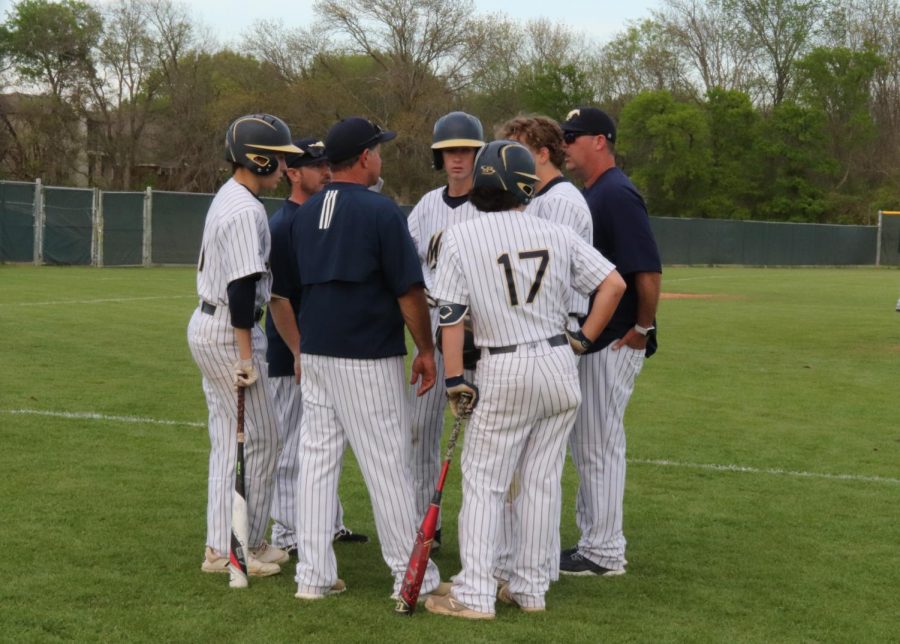 Head coach Mike Pirtle talking to the baserunners while the other team changes pitchers.

McKinney Christian Academy traveled to Fort Worth March 1 to take on district opponent, Southwest Christian. Senior Zach Tokarczyk started pitching for the Mustangs and later in the game, Sam Utzig came in as a relief pitcher. Sophomore Hayden Faulkner comments on how he thinks this game is preparing them to play Grapevine Faith on Thursday saying, “I think if we can improve on our approach at the plate we can beat Grapevine Faith.” The Mustangs fought a hard battle against Southwest Christian but unfortunately came up short with a loss of 8-0.

The Mustangs played Grapevine Faith at their field at 7:00 on Thursday, March 28. The team traveled to the field immediately after school. Sophomore Cooper Roach started on the mound for the Mustangs. Later in the game, sophomore Ryan Radtke came in as relief from the bullpen. Battling the Mustangs came up short losing 13-0.

The next day, they played Grapevine Faith again at Grapevine Faith’s field. Utzig started the game on the mound, midway through junior Blake Rodgers relieved and then later junior Ford Dossey closed out the game. Faulkner and Dossey led the team in hits with two each. Although several Mustangs had many hits they fell short losing 14-4.