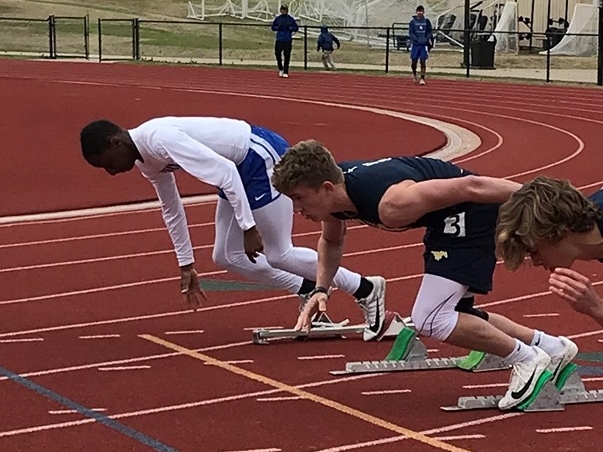 As the gun goes off, junior Aaron Phillips starts to push off of the blocks to race in the 100m dash.

This season only four track athletes qualified to compete in the TAPPS 5A State track meet held on May 4 at Waco Midway High School in Hewitt, Texas. Moving up to 5A this year increased the challenge of making it to the final meet, but MCA was ready.  Breaking his own personal record, sophomore Maliq Brock took first place in the 400m dash with a time of 50.07 seconds. Senior Josh Pawlish, who has made it to State the past two years, competed in shot put and discus. He placed third in shot put, throwing 47’04”. In discus, he placed fifth with a 148’03” throw. Senior Riley Pyle competed in the 3200m and 1600m, placing fifth in the 3200m and eighth in the 1600m. In the 100m, junior Aaron Phillips achieved a personal record of 11.31 seconds and placed seventh. Even though MCA’s team only had four athletes competed, the school placed tenth out of 25 teams. For moving up a division this season, the MCA track team represented the school well.