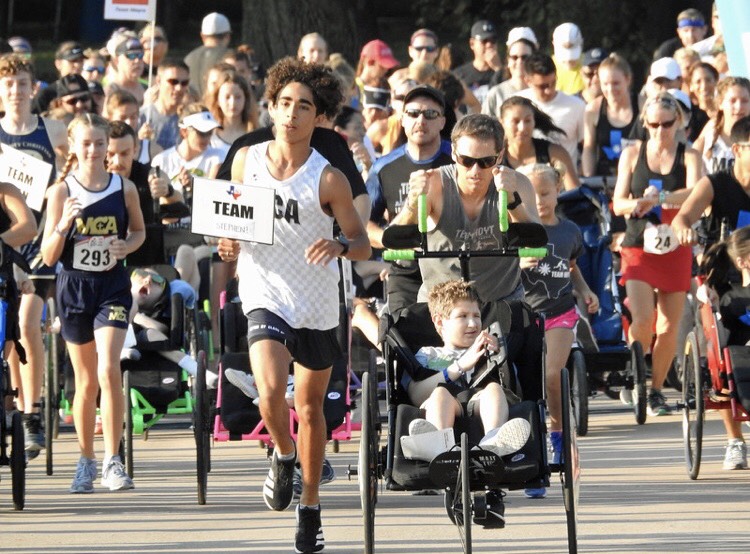 Maliq Brock, 11th, starts off the 5k strong with his partners Steven and Eric alongside over 200 other runners.

Team Hoyt is a foundation started by Dick and Rick Hoyt that serves to boost the confidence of disabled children across America through racing. Some of these kids don’t usually have the opportunity to feel the fulfillment and gratification of completing a race, but through races like those sponsored by Team Hoyt, that opportunity is put within reach. Each race serves an important purpose, whether it’s a marathon being run or a simple 5k. This Labor Day, Team Hoyt hosted the “Yes You Can! 5k” at McKinney’s Towne Lake. The day before the race, however, MCA hosted a speaking event with Dick Hoyt in the Student Life Center. Those who attended were able to hear the story of how Dick Hoyt’s foundation came to be, as well as a few personal words. The speaking event helped to lift excitement and spirits for the 5k that was to come.

The following day, McKinney Christian cross country runners met at the race site bright and early to be assigned their Team Hoyt Texas running partners. A few MCA runners were able to run alongside their partners carrying a “cheer stick” or pushing their partner’s chairs along. Junior, Maliq Brock was paired up with 12-year-old Steven, who he accompanied throughout the race. Brock said: “I honestly loved running with Steven because it gave me an even greater appreciation for the gift that God has given me.” He also included that he has a ton of respect for Eric, Stephen’s dad, who makes it a point to continuously run for his son who isn’t able to.” McKinney Christian was well-represented at the race; the crowd was peppered with blue and gold cross country uniforms, pushing chairs and cheering on runners from the sidelines.