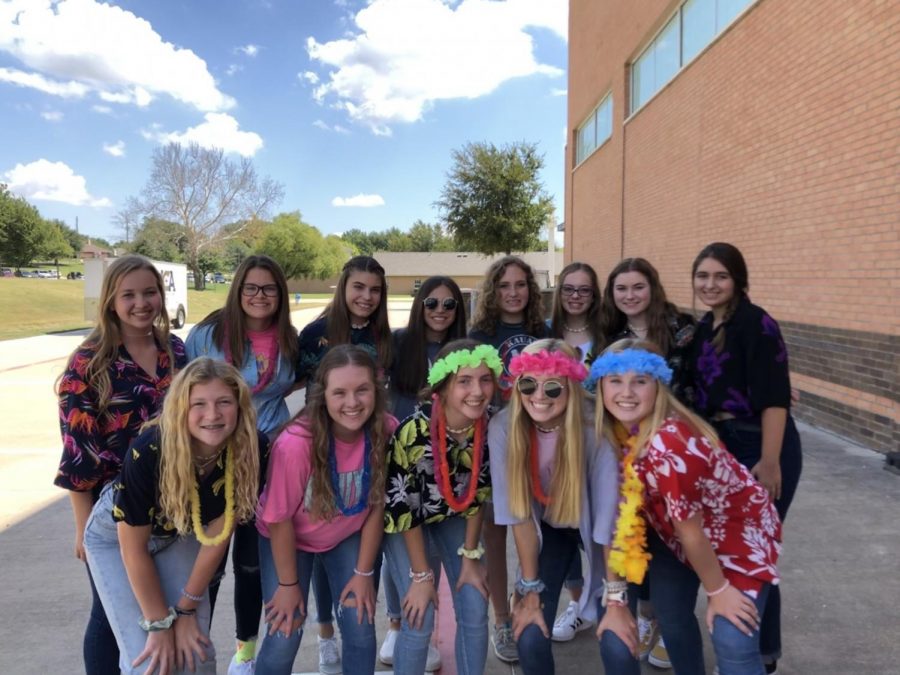 A group of Freshman girls on "Tropical Tuesday."

Every year at MCA, there is a special week that leads up to the homecoming football game and dance. During this week, the students get the privilege to dress up according to the theme days and take a lot of pictures with their friends. The theme for the homecoming dance this year was “Hawaiian Hula” and a few of the dress days related to this main theme. Monday was “Matching Monday.” Students often coordinated outfits with their friends. Freshman Sarah Krusing said, “My favorite dress day was ‘Matching Monday’ because I got to dress up in a cow onesie with all my best friends.” Tuesday was “Tropical Tuesday,” and everyone wore Hawaiian shirts and colorful leis. Wednesday was “Wild West Wednesday.” The students came to school in their best western outfits. Thursday was “Surfers vs Skaters.” Students dressed in black jeans and Vans, or their best surfer wear.

Lastly, Friday was Powderpuff day. Students wore the 2019 homecoming shirt or their new class shirts. On Friday morning Students checked into their first period, and headed down to the football field to kick off their Powderpuff games. First, the seniors played the freshmen, who won by a touchdown. Then, the sophomores played the juniors, who won after going into overtime. Senior, Brooke Fillebrown’s fourth, and last year playing Powderpuff was an upset. She said, “My favorite part about Powderpuff this year was the amazing practice we had on Sunday and our team bonding, even though we ended up losing.” After the first two games, the students quickly prepared for the championship game between the juniors and the freshmen. It got down to the last seconds of the game and the teams were tied. They went into overtime, then double overtime, and after many attempts at getting a touchdown it was decided that there would be a kick-off to decide the winner. One freshman and one junior took turns kicking field goals. After four rounds, the juniors missed a field goal attempt. The freshmen then made their attempt and won the championship game of Powderpuff. After a lot of cheering and congratulating, everyone headed inside for the boys volleyball games. Freshmen boys lost against seniors, and the sophomores lost against the juniors. For the championship round the score was tight, but juniors edged out against the seniors after senior Jonny Greenwell was injured. The events leading to the homecoming game and dance create memories for the students, some unpleasant, and some victorious.