Myers Park, one of McKinney's most tranquil nature spots, held thousands of runners for the annual Lovejoy Invitational. 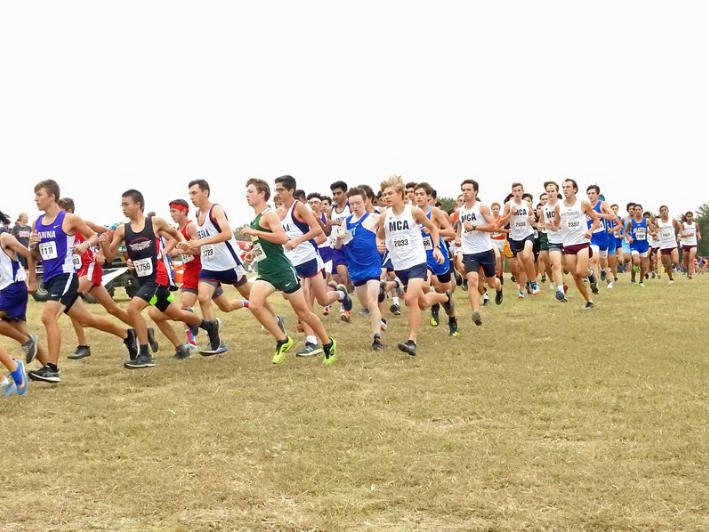 A pack of MCA runners can be seen cautiously rounding the first corner of the course. Runners were closely packed together for the first quarter-mile of the race.

After two years of rain cancellations at Lovejoy’s Myers Park Invitational, runners were finally granted the opportunity to challenge themselves at the difficult course. Ironically, there was an exceptional lack of moisture on the course as opposed to the past few years, and as an effect, the course was littered with cracks and potholes. Runners were found staring intently at the ground as they ran to avoid twisted ankles and other injuries. Eight high school races were run as well as two middle school ones, and over 100 teams filtered on and off the course as races progressed throughout the morning. Despite the crumbly course and intimidating odds, the Mustangs were able to make this meet count.

The morning kicked off bright and early with the “elite varsity” races, these elite races are common at large public school meets as they accommodate large A-list teams. Next up were the D-1 boys and girls races, comprised of 5A and 6A public schools. The Mustangs were finally unhitched when an announcement came over the loudspeakers summoning the D-2 girls to the starting line.

Within a moment’s notice, the Varsity and Junior Varsity Girls were on the line, warmed up, and awaiting the arrival of the 4×4 which would lead the head runners through the course. Once the girls had started, the hilly course quickly dispersed runners into groups of similar speed. A common strategy among many Cross Country runners is to stick with the pack you find yourself running with until the end, but some runners like Senior Taylor Robison often try to chase down a quicker one. Robison came in 46th place, finishing her 5k in 24:25.

Shortly after all the D-2 girls had crossed the finish line, the starting gun was fired, sending the D-2 boys off. The course was both clumsy and crowded; 143 runners started and finished the race. Junior Peter-Michael Clark took advantage of the abundance of competition and made an effort to pass whoever he found himself running behind, Peter was able to earn a personal record 5k time of 18:30.

Last but not least, the Junior Varsity boys. Later on in the morning, the JV boys were called to the start line to warm up, and a few minutes later they were tearing across Myers Park. Luckily the weather was mild during the 10:45 am run, otherwise the run could have been more challenging. Junior Aidan McKeller was able to summon a personal record out of thin air, completing his 5k in 21:53.

After all was said and done, the Cross Country tent was stowed away and the runners were able to say “good riddance” to the difficult course.