The class of 2020 travels to Chickasaw Retreat Center in Oklahoma for some much-needed rest and recreation. 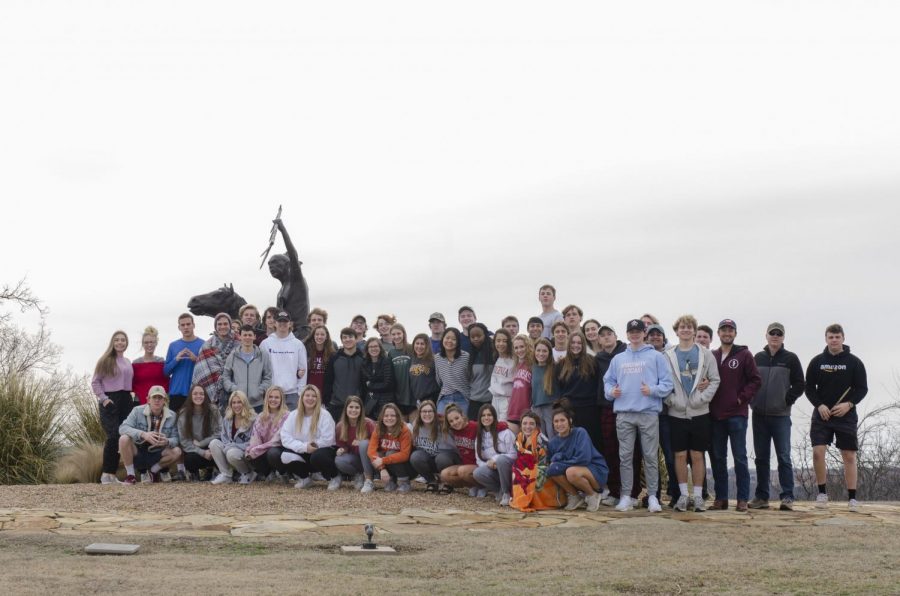 The class of 2020 gathers for a picture by a statue in front of the hotel.

Senior year is for preparing for college, challenging yourself, and making memories. Evidently, McKinney Christian Academy seniors are challenged day by day and spend a lot of time working on college preparations. Seniors are often so swept up in their busyness that they forget to enjoy their last year with beloved classmates. Though the senior trip is a thing of the past, MCA seniors still have a short time to have fun and make memories as a class through the senior retreat.

This retreat has been in the making for weeks, completely orchestrated by student body president Seth Pugh. To kick off day one, seniors arrived on campus the afternoon of January 19 to load the bus for the trip up north. In no time at all, the seniors found themselves unpacking in their new hotel rooms at Chickasaw Retreat Center in Sulphur, Oklahoma. Seniors spent the night at the hotel playing hide and go seek, playing Rock Band, or sweating it up in the sauna. Hannah Grubbs also led a short devotion after dinner. After travel and the building excitement for what was to come, day one at Chickasaw came to a close.

It’s 8 o’clock, and everybody’s downstairs inhaling eggs and bacon in preparation for the long day ahead. There wasn’t room for dilly-dally on day two because mere minutes after breakfast, the bus was off to lunch. Needless to say, nobody turned down the meal. For the next three hours (after a short ride on the bus) students had time to rock climb, explore, and zipline at Turner Falls State Park. It’s clear that Turner Falls was a class favorite, as three hours almost wasn’t enough time. Last stop on day two was the bowling alley, where students had a good two hours to practice their gutter-ball game. Although time spent running around town is fun, the seniors were ready to head back to the hotel for some lounging. After a catered steak dinner, a devo by Caleb Buchanan and Sam Harrell, and some more free time, a majority of the seniors attended a worship night led by senior praise band members Jasmine Danielson and Jason Cross. Senior retreat isn’t just a time for students to bond with each other on a personal level but also a spiritual one. Ford Dossey and Maura Cueva kept this in mind and felt called to set up an optional lock-in where students who felt called to encourage, ask for prayer, or share what’s on their minds in a safe environment. And just like that, an action-packed day was over.

There isn’t much to be said about day three, as it was simply “pack up and go home” day. But, before departure, Will Boese led the last devotional of the retreat. The seniors left Chickasaw Retreat Center and Oklahoma just as quickly as they arrived. Now, it’s up to next year’s seniors to create another worthwhile experience filled with memories and fun.