Two MCA students and their coach participate in a triathlon. 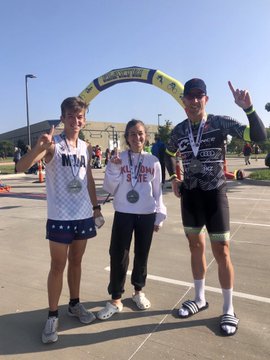 Head cross country coach, Rhett McKeller, and MCA students Alessia and Nick Catullo competed in a team triathlon. They used all their effort to carry the trio to a well-earned victory. Alessia Catullo is a senior, and Nick Catullo is a freshman; both are members of the varsity cross country team. This was not the group’s first triathlon, but actually the third one they have done with MCA. However, it was not an easy win. “Normally we come in, and we can do fifteen-minute differences or ten-minute differences to second place. It was fifty-one seconds this time, so it was a much harder competition,” says McKeller. Although the competition was much more challenging than previous events, the team crossed the finish line just in the nick of time.

After pushing themselves hard for the best possible time, the team was exhausted by the end. “You literally feel like you have pneumonia for the rest of the day because your respiration is so heavy,” McKeller explains. With a running, swimming and biking portion, the Mustangs finished in first place with a final time of 54:33. Even though they were tired, the triathletes demonstrated their teamwork throughout the race. McKeller remarks, “Had it not been for Alessia getting out of the pool and running to me to the transition as fast as she did, and Nick’s fast transition, we might have gotten beat. It was that critical for our transitions, so they did a great job there.” McKeller, Alessia Catullo and Nick Catullo’s perseverance and collaboration is what lead the them to their spot in first place.