The Varsity Football team traveled to Tyler this past Friday to play against Grace Community. 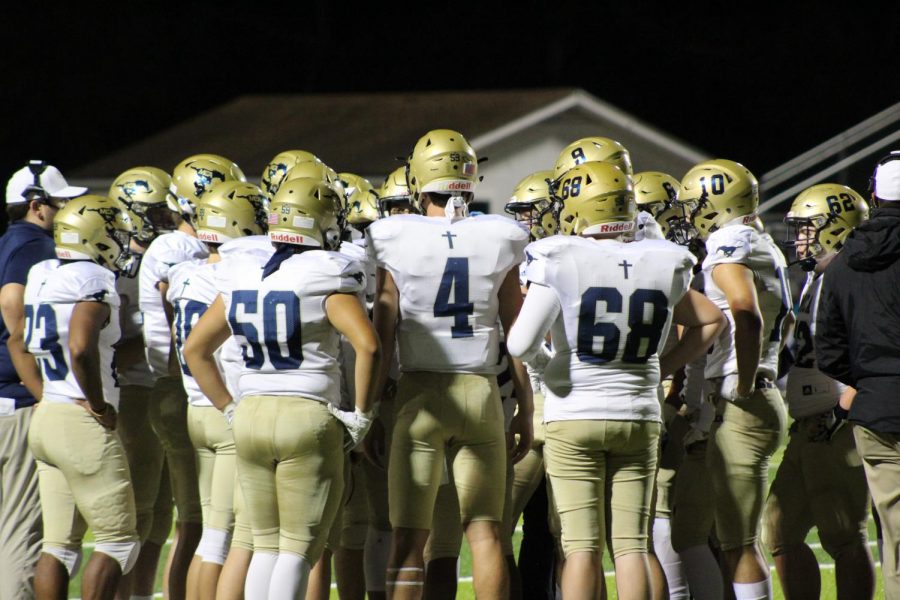 Mustangs huddle during a timeout to go over plays.

This past Friday, October 16, the Mustang football team played Grace Community for their first district game of this 2020 season. They dropped the game 56-73 after a well fought battle with the Cougars. Despite the loss the Mustangs assistant head coach Darrick Ware said, “It was a wild game we had 710 yards of offense. We were ahead at times and behind at times and pulled within four points at one point in the game.” Although they lost the Mustangs still put up a fight. Junior Zeke Long ended the game with five catches for 244 yards and three touchdowns. Senior Hudson Cross, finished the game with 11 catches for 172 yards and two touchdowns. Junior Sebastian Claudio finished out the game with five solo tackles and two assists. When asked about last Friday’s game and this upcoming week Claudio said, “I think we have one of if not the best offense in TAPPS, but the defense really needs to step it up.  As a part of the defense I know we are going to take this week to focus on our responsibilities so that we can compliment the offense as much as possible and be the best team we can be.”

This Friday, October 23, the Mustangs will host their second home game of this season against Dallas Christian at Ron Poe.