Despite injuries the Mustangs gave Brook Hill a fight. 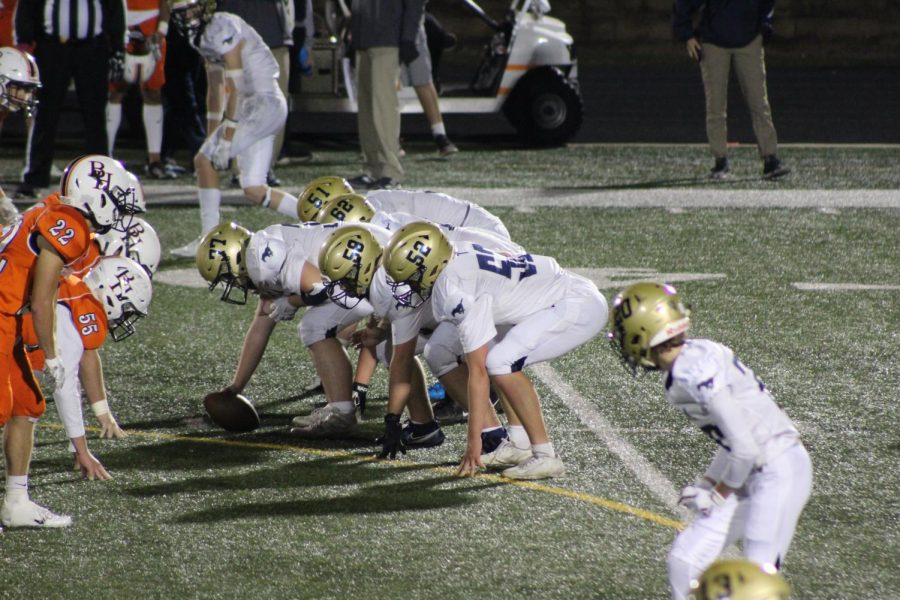 The offensive line men setting up for the snap.

On October 30, the Mustangs varsity football team traveled to Bullard to play against Brook Hill. The Mustangs lost 35-8 putting up a good fight against the Brook Hill guards. Due to injuries, four of the Mustangs starters were not able to play. This gave an opportunity for many non-starters to start and experience the game in a different light. Head coach Chance Gray addressed the injuries and Friday night’s game in an interview after the game saying, “I’m grateful to be out here with them, fighting with them. Knowing we have injuries we can not use that as an excuse so it is the next man up. We prepared all week in practice and then we held them to that same standard. That is the way that healthy programs, competitive programs, and championship programs have to be run.” Freshman Cash Etheredge led the team in offensive passes along with seniors Cooper Roach and Hayden Faulkner all playing quarterback at some point in the game. Roach who filled in as one of the backup quarterbacks in Friday’s game said, “Though we were plagued with injuries, we had many players step up and play positions they were not necessarily comfortable playing. I was one of the players who had to step up and fill Blake’s shoes which is not an easy task. All in all as a team we had to remain resilient.” Along with leading the team in offensive passes, Etheredge turned in two key interceptions on defense for the Mustangs. Freshman Jax Marshall and Faulkner led the Mustangs in defensive tackles.

The Mustangs last home game of the regular season and also Senior Night is Friday, November 6, against Bishop Dunne at Ron Poe.