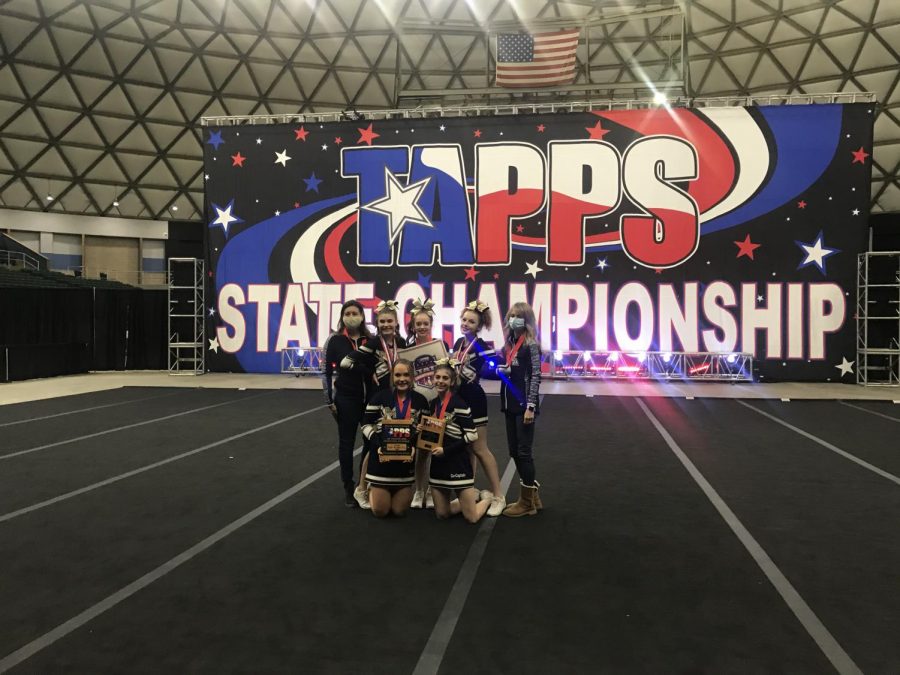 The Varsity cheer team at their previous competition.

After winning state-runner-up in their division at the TAPPS State Cheer Competition, the varsity cheer team decided to keep competing towards their next goal, Nationals. The team registered for the UCA January Challenge and started preparing immediately. In only one week, the cheerleaders managed to rework their routine, add in more signs, flags and incorporated more stunts. The team’s only flyer in the routine, Sophomore Karson Kuykendall said, “I felt that as a team we were strong and executed our routine very well. With a team of strong bases, they make it easy to feel confident in the air even after putting the stunts together quickly.” The video submitted had to be recorded specifically for the event, and could not be a previous recording of their routine. Editing the video in any sort of way was also prohibited and all four corners of the nine mats had to be in view of the camera. The team was specifically evaluated on their ability to lead the crowd, proper gameday skill incorporations/performance, motion/dance and overall routine. On the 18th of January, the cheerleaders got competition ready and filmed their routine to submit to the judges.  Tom and Kayla Moore filmed the cheerleader’s routine at a private cheer gym.  After a week of waiting, the cheer team zoomed on Sunday, January 23 to watch their own video and five other competitor’s video routines on Varsity TV.  Later that night, the cheerleaders received the news that their score qualified them for a bid to UCA High School Nationals. When asked what she thought about how the cheerleaders did, varsity cheer coach Natasha Verbsky said, “Though I am so proud of them for their skill as cheerleaders, I am more impressed by them as individuals. Even during busy times, and under pressure, they rise to the occasion with a positive attitude. This group of young ladies is Christ-like, regularly demonstrating kindness and putting others before themselves. The varsity cheerleaders truly walk in the HE We me principal. The culture in the Varsity Cheer program is such that each of them is more concerned about the well-being of their cheer sisters than themselves. Though their primary objective is to serve others by supporting the MCA teams, leading the crowd at games and promoting school spirit on campus, it is a blessing for this squad to be recognized for and to be able to highlight MCA through, their excellence in their sport. It is a privilege to coach these precious girls. I love them each dearly.” After doing well at two competitions, the cheerleaders have high hopes for what next season holds.