The Mane Edition • May 16, 2021 • https://maneedition.mckinneychristian.org/2021/05/16/varsity-baseball-team-closes-their-season-and-makes-history-at-state-semi-finals/

After putting up a fight, the Mustangs close their baseball season with a loss against Southwest Christian at State-Semi Finals 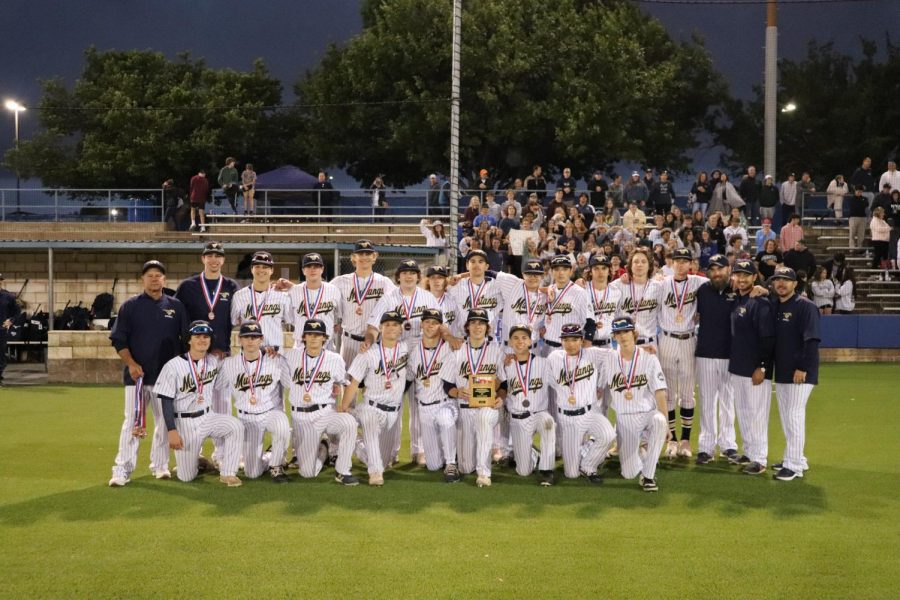 The MCA Varsity Baseball team gathers for a picture after a good game.

After winning historic Regional Championship win, the Varsity Baseball team advanced to State Semi-Finals. The Mustangs played on May 12 in Waco, Texas against Southwest Christian. Many MCA fans made the trip down to Waco to watch the team play at 6 p.m. After the first inning, both teams were scoreless. Senior Hayden Faulkner put the first point up on the board after senior, Hudson Cross drove him in with a hit in the second. Senior Jacob Finke got senior Jake Gerardis home off of a walk getting the Mustangs ahead 2-0 at the end of the second inning. Senior Cooper Roach filled in for senior Ryan Radtke as pitcher after the sixth inning. Overall, Radtke had nine strikeouts. Southwest Christian then caught up in the third inning tying the score. At the top of the seventh inning with the bases loaded, Southwest Christian scored the winning run ending the game 3-2. Senior pitcher Ryan Radtke said, “We played our hearts out and left it all out of the field. We loved all of the support and couldn’t ask for a better group of guys.” Although it was a tough loss, the Mustangs still made history by advancing further than any MCA baseball team has in the history of the program.