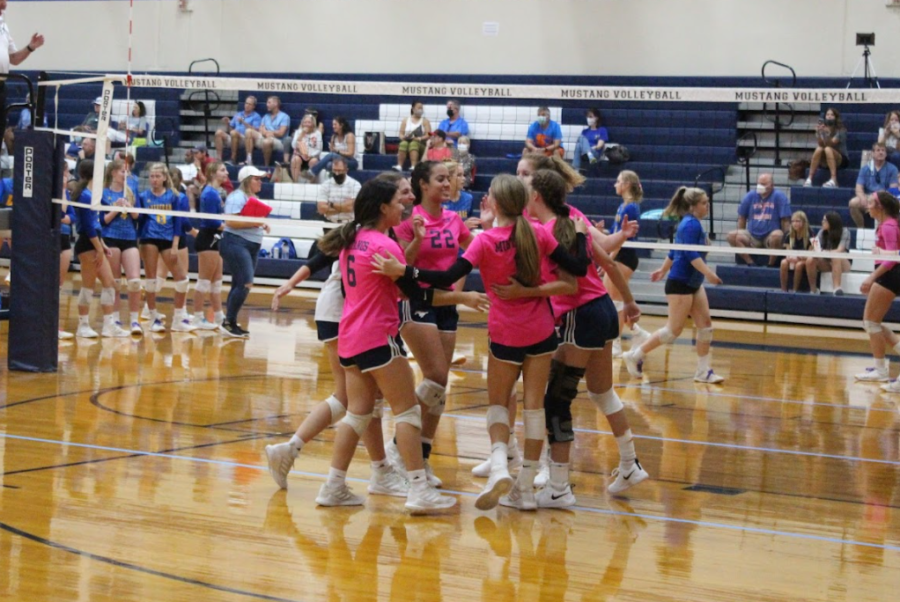 The Lady Mustangs come together to celebrate after winning the point.

This past weekend the Lady Mustangs volleyball team hosted the twelfth annual Tournament of Champions. This tournament consisted of 16 teams playing four pool play games with the top two teams in each pool go to the gold bracket and the bottom two teams go into the navy bracket. The Lady Mustangs ended up finishing third in the Gold Bracket.

On Thursday, August 26, the Varsity Mustangs went 3-0 playing against Dallas Lutheran, Frisco Legacy JV and Rockwall Heritage. On Friday, the MCA JV volleyball team played against DasCHE, Katy Faith West and Red River and went 0-3. On Saturday, Varsity went 1-1 winning against Dallas Covenant and then losing to Parish in the semifinals. Sophomore Sky Miller ended the weekend with 27 kills and senior Bella Vaught led the teams with 34 digs. Miller was awarded All Tournament team. When junior Daniela Morales was asked about the tournament, she said, “I think we really came together as a team and that the tournament was a good way for us to become more confident in our playing. I am looking forward to district because the teams have gotten better and I know it will be fun playing those competitive games.” The Lady Mustangs next game is on September 14 against Frisco Legacy.