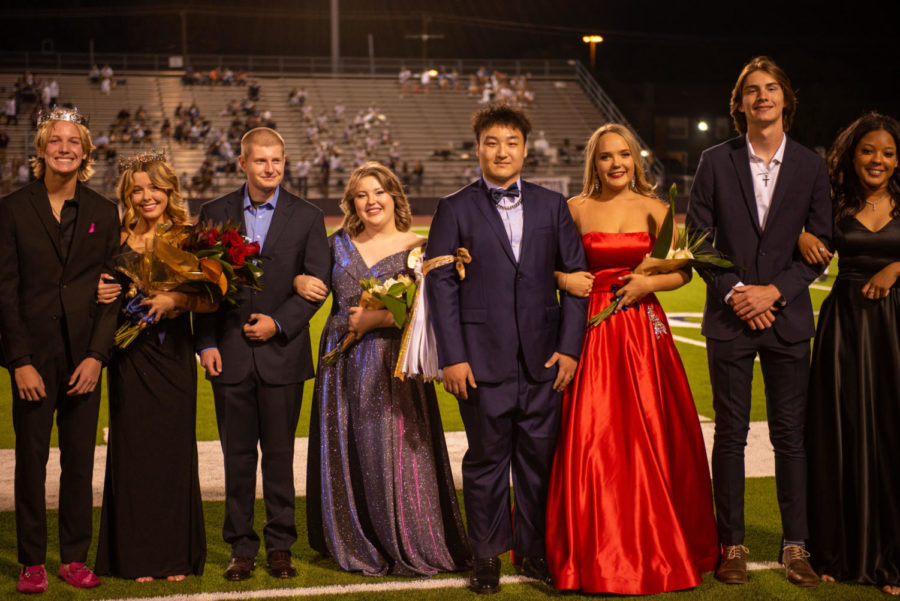 A yearly tradition at McKinney Christian Academy is homecoming court. Each year, Upper School students are nominated for homecoming court by their fellow classmates. One boy and one girl from each grade are elected based off of their character. For the senior class, four girls and four boys are nominated to be homecoming king or queen. The elected students from each grade are as follows: Freshmen Neima Strauch and Cal Emley, Sophomores Sky Miller and Wyatt Tessier, Juniors Marisol Sanchez and Bradley Dovel, and Seniors Maddie Clark, Xiomara Oakey, Angelina Barrow, Samantha Youngblood, Landon Harrell, Stanley Wen, Kole Medders, and Maddox Pederson. At the homecoming football game last Friday, September 24, the elected students walked out onto the field to be announced. Former homecoming king and queen Maggie George and Asa Miller came to the game to crown this year’s king and queen. Maddox Pederson and Maddie Clark were crowned 2021 homecoming king and queen. This years homecoming queen, Clark said this when asked about being crowned queen, ” I feel incredibly honored and appreciative of all the teachers, staff, students, and coaches that have been along side of me during my time at MCA. This was such a cool experience that I will remember for the rest of my life!”

This year’s homecoming dance was a hoedown held outside of the Upper School. Starting at 8 p.m. Saturday, September 25, students danced the night away in their cowboy hats and boots. The dance floor was decorated with hay bales, candles, flowers in cowboy boots, and cacti. Students could bust a move on the dance floor, take some photos in the camper photo booth, or grab a dessert at the dessert table. With the dance being outside, students got to truly embrace the hoedown theme.