The Mustangs Middle School basketball team is off to a strong start in the 2021-22 season. 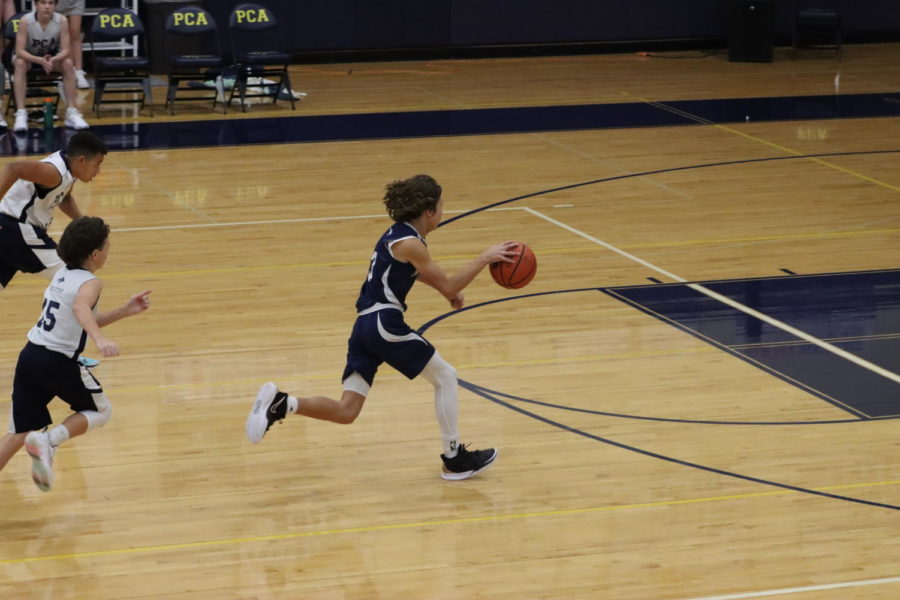 Eighth grader Noah Melton speeds past his defenders dribbling towards the basket.

The Middle School D1 Boys team currently holds a 6-2 record with wins against Prestonwood, Prince of Peace, Garland Christian, and others. The two leading scorers this year are Adam Gicheru and Hutson Clayton. The roster consists of mostly 8th graders which include Gicheru, Clayton, Dane Johnson, Noah Melton, Jaxon Dover-Smith, Tennyson Clark and David Graesser. The team also has three 7th graders: Joey Gunn, Mason Reeves and Will Agness to round out the ten man roster. This is what Coach Hamilton had to say about D1, “I am excited to see how much better they get the further we get into the season.The team has grown a lot in the first month and have improved both their skills and chemistry on the court. They have done a good job of learning and absorbing information from practice and applying it to the games which has been a large part of our success. The boys have put in both the effort and energy necessary to have a good record, but there is still room to improve and get better as the season goes along.”

The Middle School Boys D2 basketball team has had a more difficult start to the season, with some very stiff competition week after week. Their record right now stands at 1-6, leaving a lot of room for improvement. They have been competitive in several games, losing by only single digits. The D2 team has a very extensive roster and are led by the leadership of 8th graders Grady Rogers and Luke Webb. The other 8th graders on the roster are Cayden Kerico and Bradley Giroux. The 7th graders that complete the roster are Asher Huffman, Angel Lopez, Collin Kincheloe, Rydon Lansford, Gavin Ballew, Brayden Ramirez, Corey Sizemore, Preston Tucker and Jack Nobles. The team has shown great improvement and ability to learn from Coach Gilmore. For a team with so little basketball experience they have been able to understand concepts and improve their knowledge about the game dramatically. Coach Hamilton said,”With so much improvement already I am excited to see where the rest of the season takes these guys and to see just how much they can improve from start to finish.”