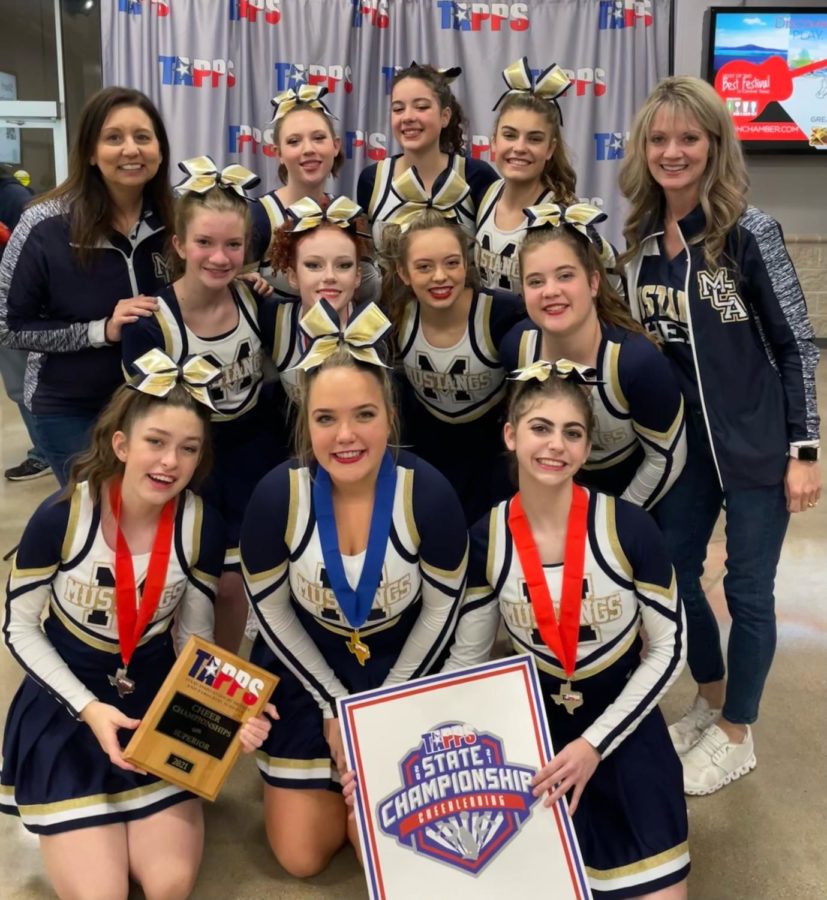 The cheerleaders pose with their awards after they competed.

On Tuesday December 7, The McKinney Christian Academy varsity cheerleaders traveled to Belton, Texas to compete in the TAPPS State Cheerleading Championship. The varsity cheerleaders started preparing for this competition in August and spent a lot of time at a local cheer gym practicing their routine. The squad specifically competed in the Division five and six Spirit Squad. The team had the opportunity to perform twice on Tuesday, one counting for 40%, and the other counting for 60% of their overall score. After performing around 10:15 a.m., the cheerleaders improved their routine, and performed for one final time at 2:15 p.m. At the end of the competition there is a “Jump Jam” in which freshmen Leslee Buchanan and Elise Winston, junior Karson Kuykendall and senior Maddie Simmons competed with other cheerleaders for the highest jump. Finally, there was an award ceremony. The varsity cheer squad ended up with a superior rating and four individual state titles. Junior Birdie Martin received All-State Honorable Mention, senior Co-Captains Maddie Simmons and Campbell May received Second Team All-State, and senior Captain Samantha Youngblood received First Team All-State. When asked about how she thought the cheerleaders did, varsity cheer coach Natasha Verbsky said, “The varsity cheerleaders worked hard to prepare for TAPPS. I am so proud of their accomplishments. Most importantly, I am proud of the way the girls put each other above themselves, are kind, and Christ focused.” On New Years, the Varsity Cheer Team will compete at the Fellowship of Christian Cheerleaders National Competition in Orlando, Florida.