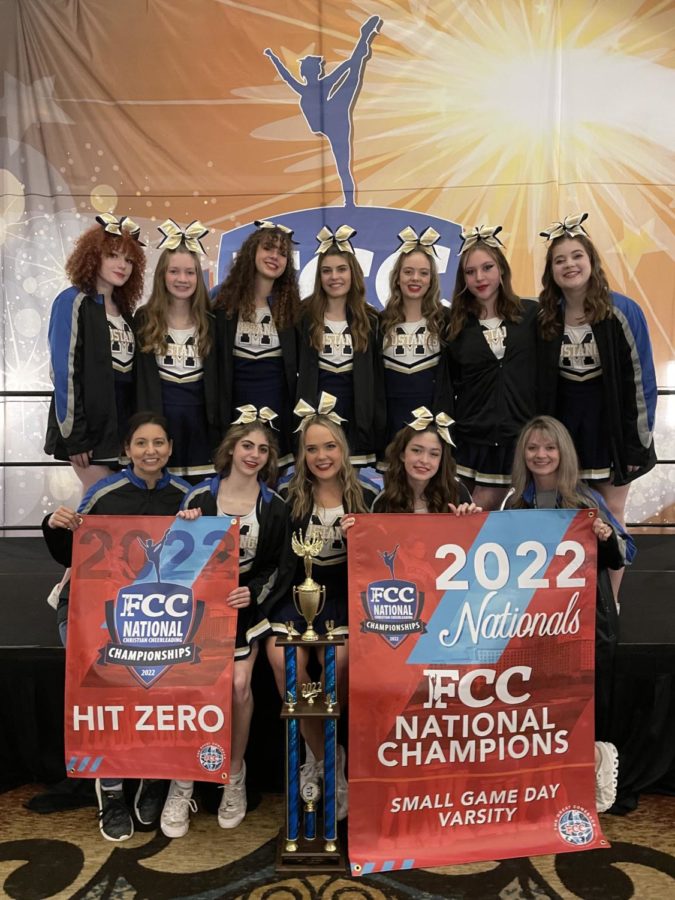 The varsity cheer team with their awards after the award ceremony.

Over Christmas break, the varsity cheer team traveled to Orlando, Florida to compete in the 2022 Fellowship of Christian Cheerleaders National Championship. After receiving a bid from FCC at their summer camp, the cheerleaders had been preparing for this competition, as well at TAPPS, for five months. The cheerleaders joined together at Rosen Shingle Creek Resort in Orlando on December 29th. On December 31, the varsity cheerleaders competed for the first time around 11 a.m. counting towards 40 percent of their overall score. Later that day, five girls from the squad participated in the stunt competition. The cheer team performed again January 1, which counted for 60  percent of their overall score. Later that night on January 1 was the FCC Award Ceremony. The varsity cheerleaders sat up on the stage with all of the other teams in their division during awards. The varsity cheer team ended up placing first with a score of 270.3 in their division, making them FCC National Champions. To celebrate their national title, the team attended Walt Disney World on January 2. When asked about the competition, varsity cheer coach, Angelique Kuykendall said, “The win at Nationals was a victory backed by hard work. The MCA cheer team mastered a new routine within two weeks of the competition, practicing through their Christmas break. Each of the athletes all bring unique skills to the team which are enhanced by the incredible leadership of their captains. The excitement that was captured when the victory was announced, was the cumulation of all of their hard work.” The cheer team’s first place win at Nationals was the best way to end their competition season.